News nº
95
November 2019
(Visite a edição completa)
More And Better
If the doll has a boo-boo, take it to the hospital 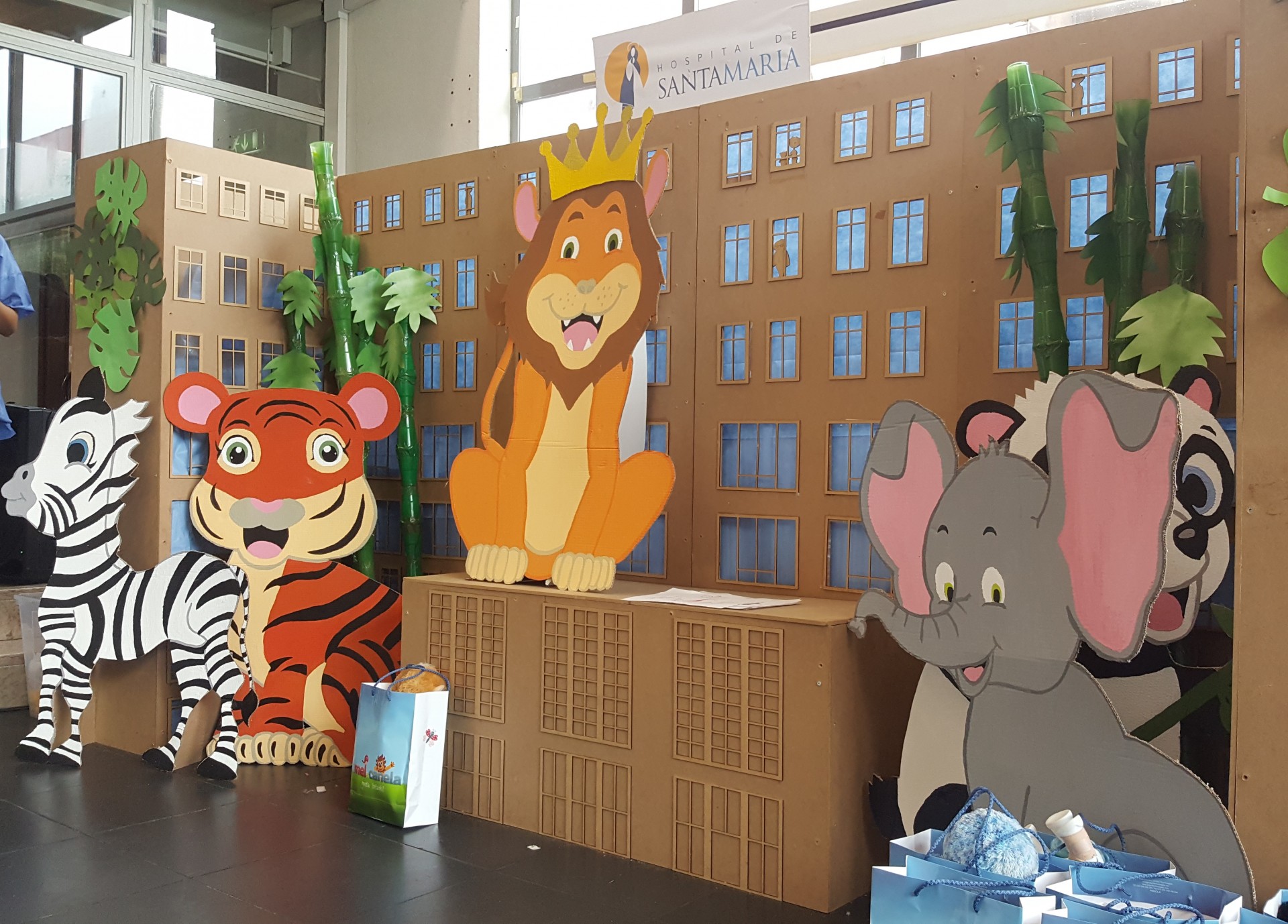 We arrived at the Cafeteria I of the Social Welfare Services of the University of Lisbon ("Old Canteen"). It rains heavily outside, but the buses never fail to pick up or drop the small passengers who took part of the day to take on new professional roles.

Inside there is a group of 20 children sitting, waiting, all in bright green jumpers, some with fogged glasses, others with standing hair, but they show a respectful, mess-free ritual before joining the Service. Expansive and curious, they are small doctors preparing to enter the hospital, the Small Children’s Hospital, which is starting its 18th edition. 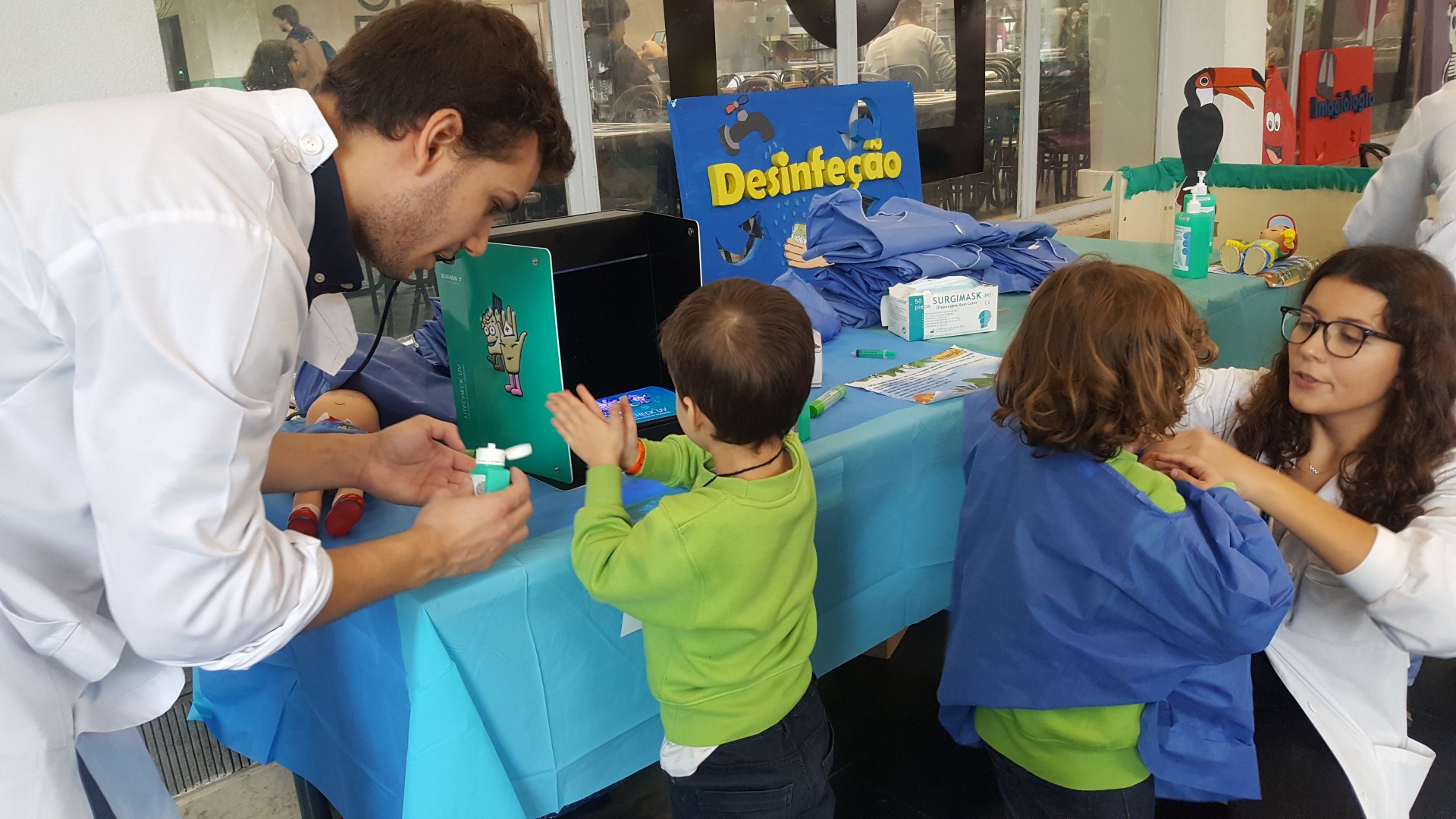 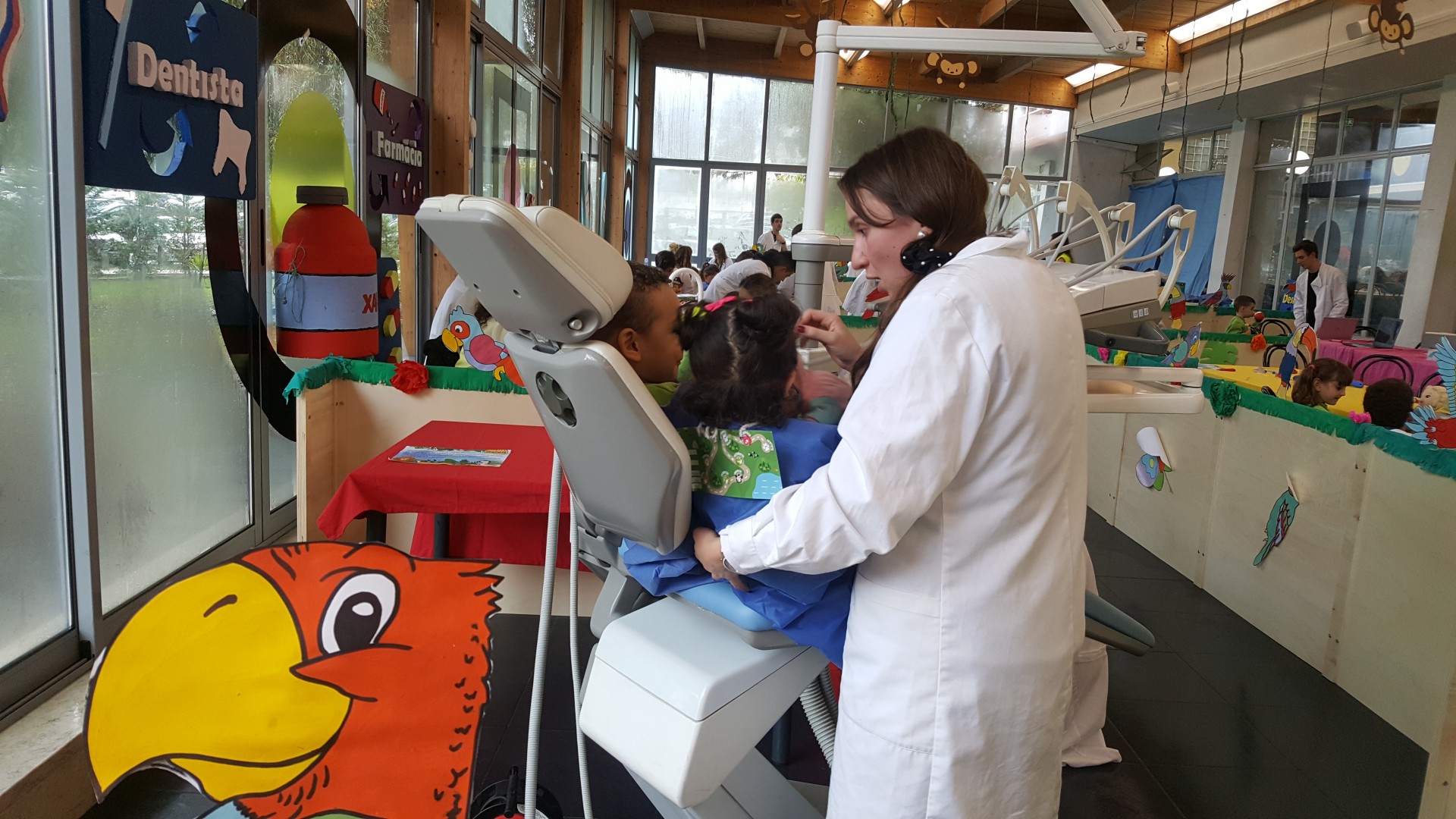 As the jungle is the topic, we are immediately introduced to the giraffe, elephant, lion, tiger and zebra, who welcome us with an open smile. On the ceiling is the long coloured snake made by the students, who did these handicrafts from early October until mid-November.

“Doctor” João gives us a guided tour of the magnificent Hospital that is flooded with small multifaceted children, as if we were living in a Snow White movie, but surrounded by more than seven dwarfs. "They are almost always shy when they arrive, stay in the waiting room where they listen to music and dance, then a mascot that is our pencil goes in and everyone wants to hug it". João Pires is the general coordinator of the Small Children’s Hospital, studying in year 4 of Medicine and from the Faculty Students’ Association.

We make our way through the “hospital”, whose entrance requires passing through an Indian tent, the height of the little ones. Right next door is the screening where a small bib identifies the doll's disease and the name of the child, who is actually the father or mother. It is the child who identifies the disease that will be treated in consultation, or passed on to the operating room. There is no doll without its fate. If it goes to the OR, the little doctor has to scrub and wear the coat. Inside, the heart monitors and anaesthetic masks are already set for the worst case scenario. I do not interrupt the little medical genius who, with his blue clothes, evaluates the entire operating room. It is time for silence, the surgery should be about to begin.

Here, in this hospital where only happy music is heard, nothing is analysed without all the method and technique, so there is an area of imaging where the CAT scan is performed and one can see the bone structure of an animal inside. There is also the blood tests room with machines and small analysts who lift test tubes to take note of the observed particles. Whether the doll requires hospitalization, or just needs to be medicated, it will not leave without the full service. Or it goes to the consultation that has the food table and chooses the meals if it stays hospitalized, or goes to the pharmacy to pick up the drugs. And if the boo-boo is extensive, there's always a bandage department that heals everything. And since no one is excluded, there is still a dentist's chair where all oral hygiene can be explained. 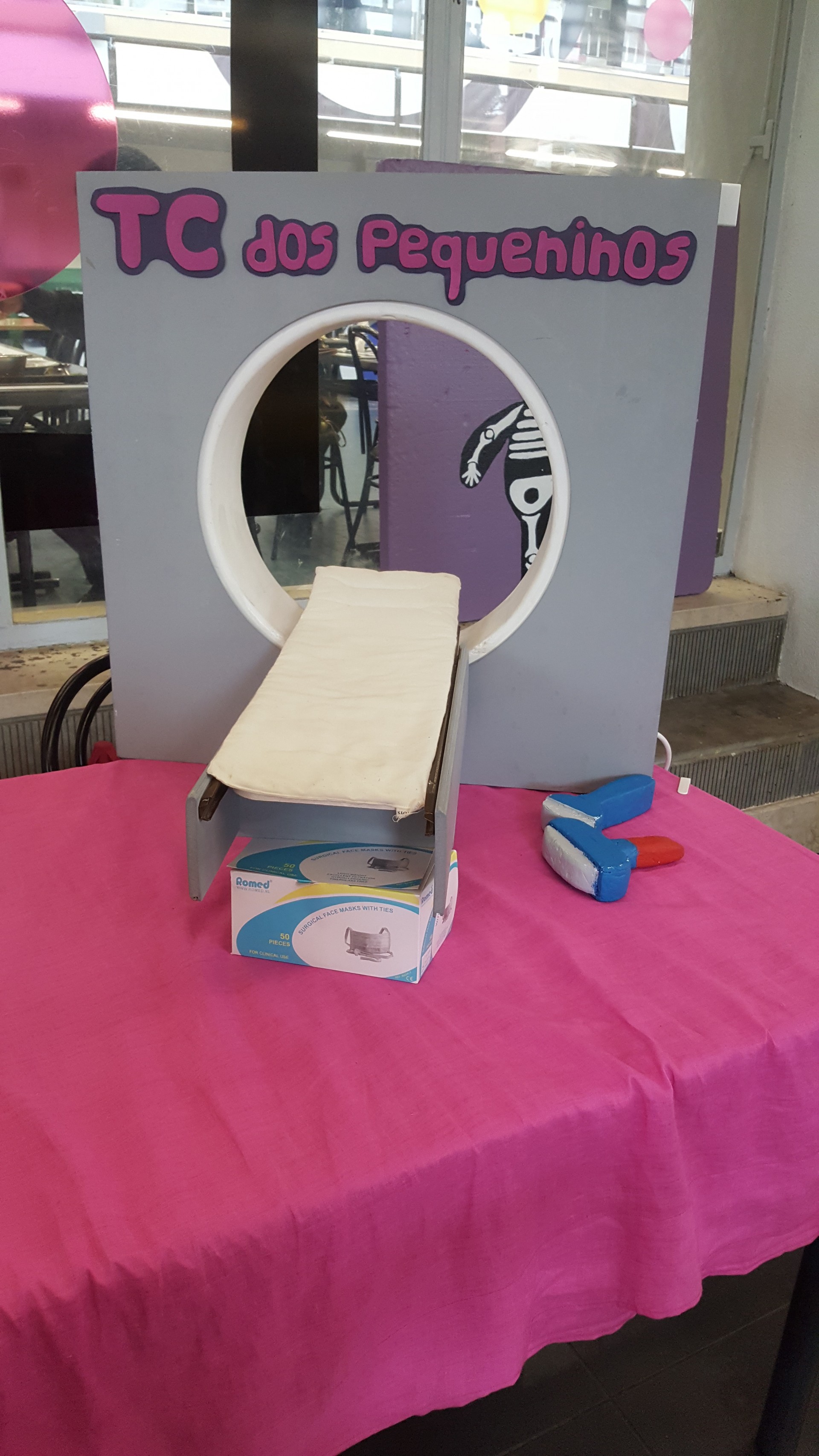 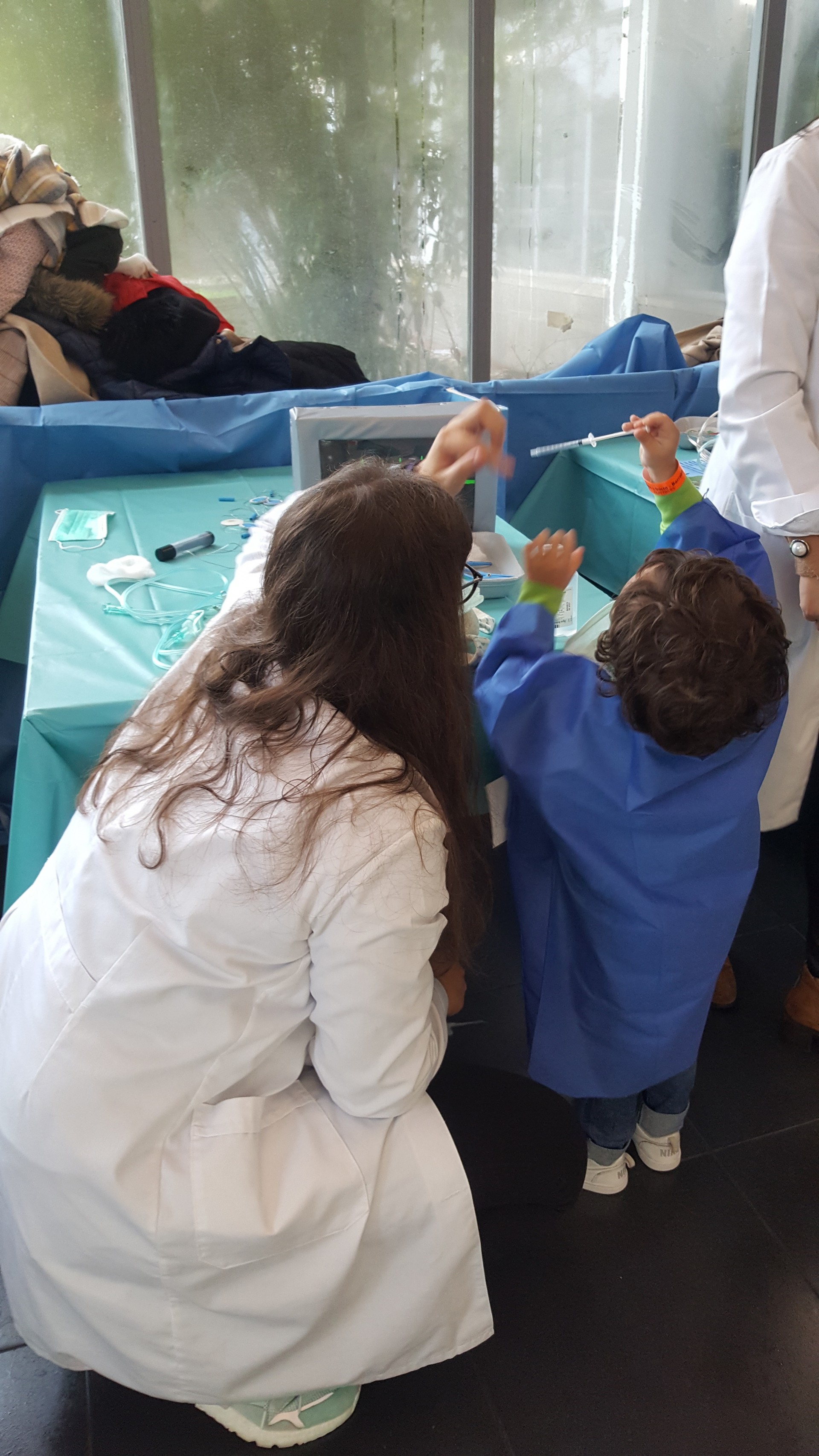 Monitoring these little doctors who are a little over a metre tall, there are other doctors, possibly several of them doctors in the coming years. 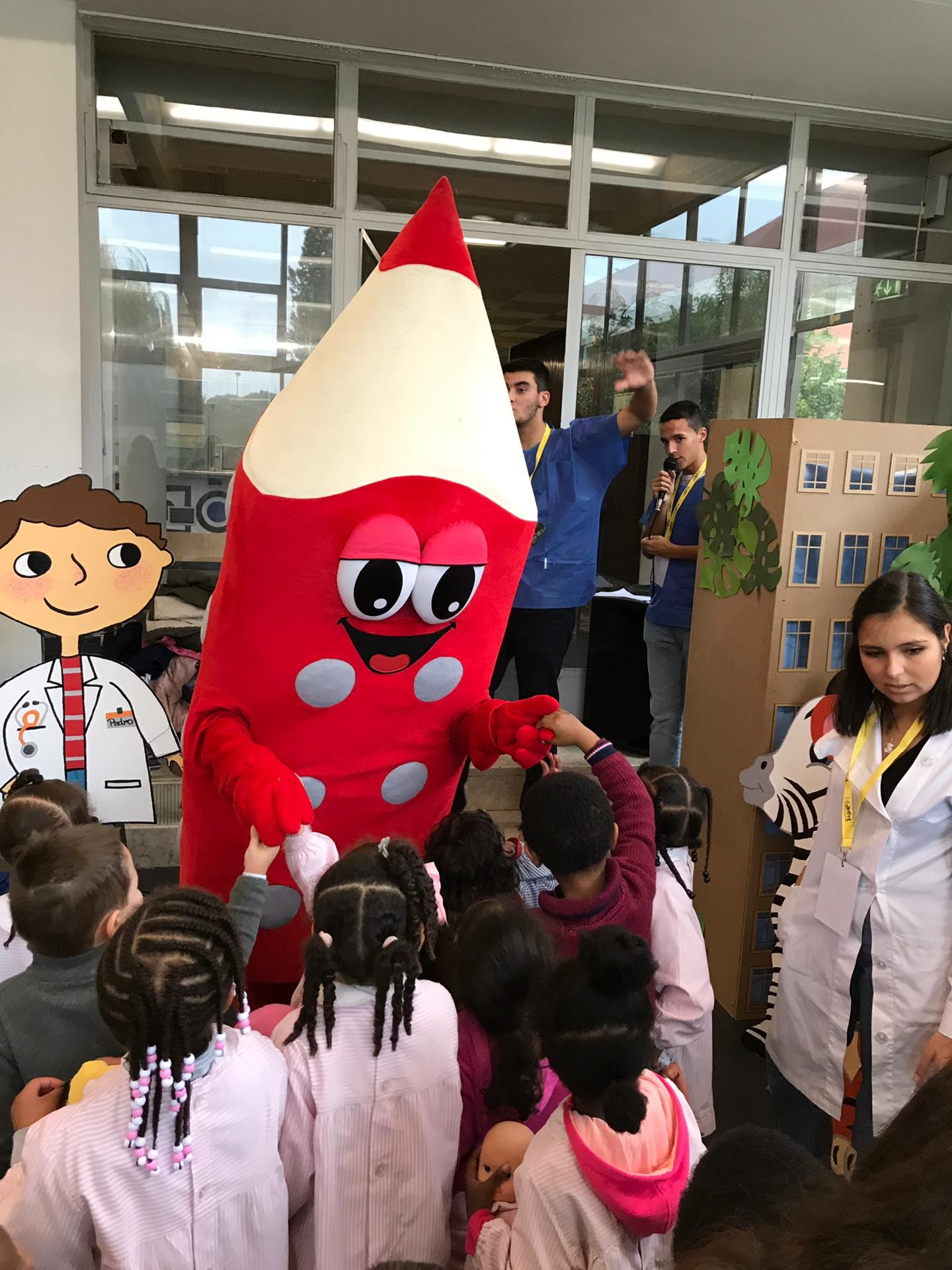 The goal is to reduce children's fear of white coats. By recreating situations that are close to reality, FMUL medical students try to stop the little ones from being afraid of going to the hospital or to an appointment.

"Often children come here in fear of Doctors and then they take care of their dolls themselves". Not least important, as João says, this action also “aims to bring health students closer to an age group with whom they have less contact”.

This action has several sponsorships that allow each child to be offered a bag with toys, pencils and other educational materials, as well as food.

Medical supplies are sponsored by Santa Maria Hospital itself, or other hospitals, but there are many props made by the commission itself, which consists of 27 committed "doctors." Helping them in this brilliant task are also students from the Faculties of Pharmacy, Dentistry and Science, all from the University of Lisbon.

The Small Children’s Hospital project was initiated by the European Medical Students' Association (EMSA), an organization made up of several Medical Student Associations in Europe, in countries like Sweden, Germany, Austria, Croatia, and the United Kingdom.

End of the emergency! When leaving the hospital, joy levitates in the air. After all, little doctors always leave with a full heart and with healed dolls. And they make students happy, who feel they have completed another mission when dozens of ghosts have been broken.

There will be more next year!