The Honoris Causa degree that moved everyone

The University of Lisbon, through the hands of Rector António da Cruz Serra, still in office, awarded the Doctorate Honoris Causa degree to Luís Portela and Jorge Alberto Costa e Silva, in a restricted ceremony at the Rector’s Office that just brought a few guests together. 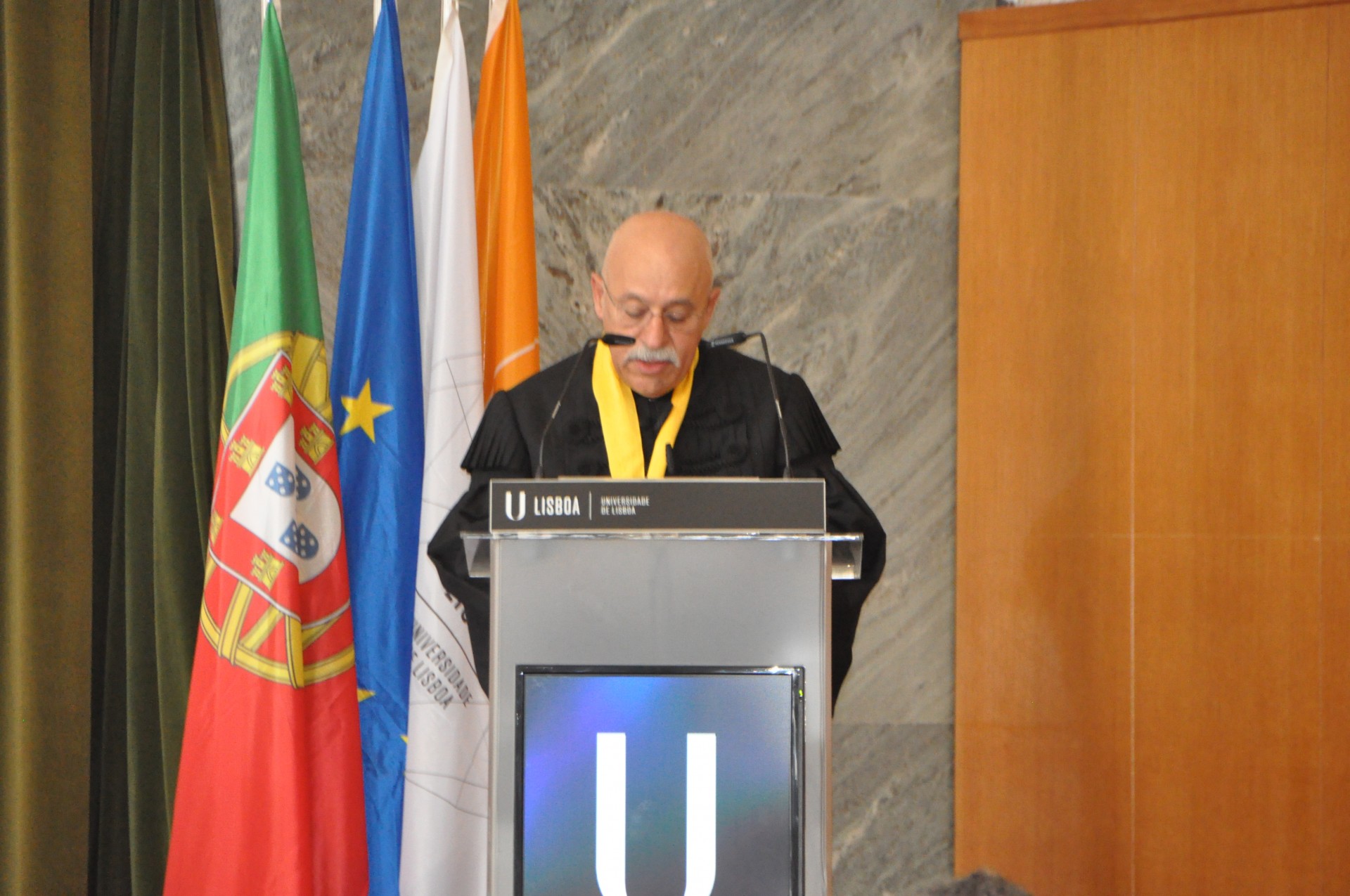 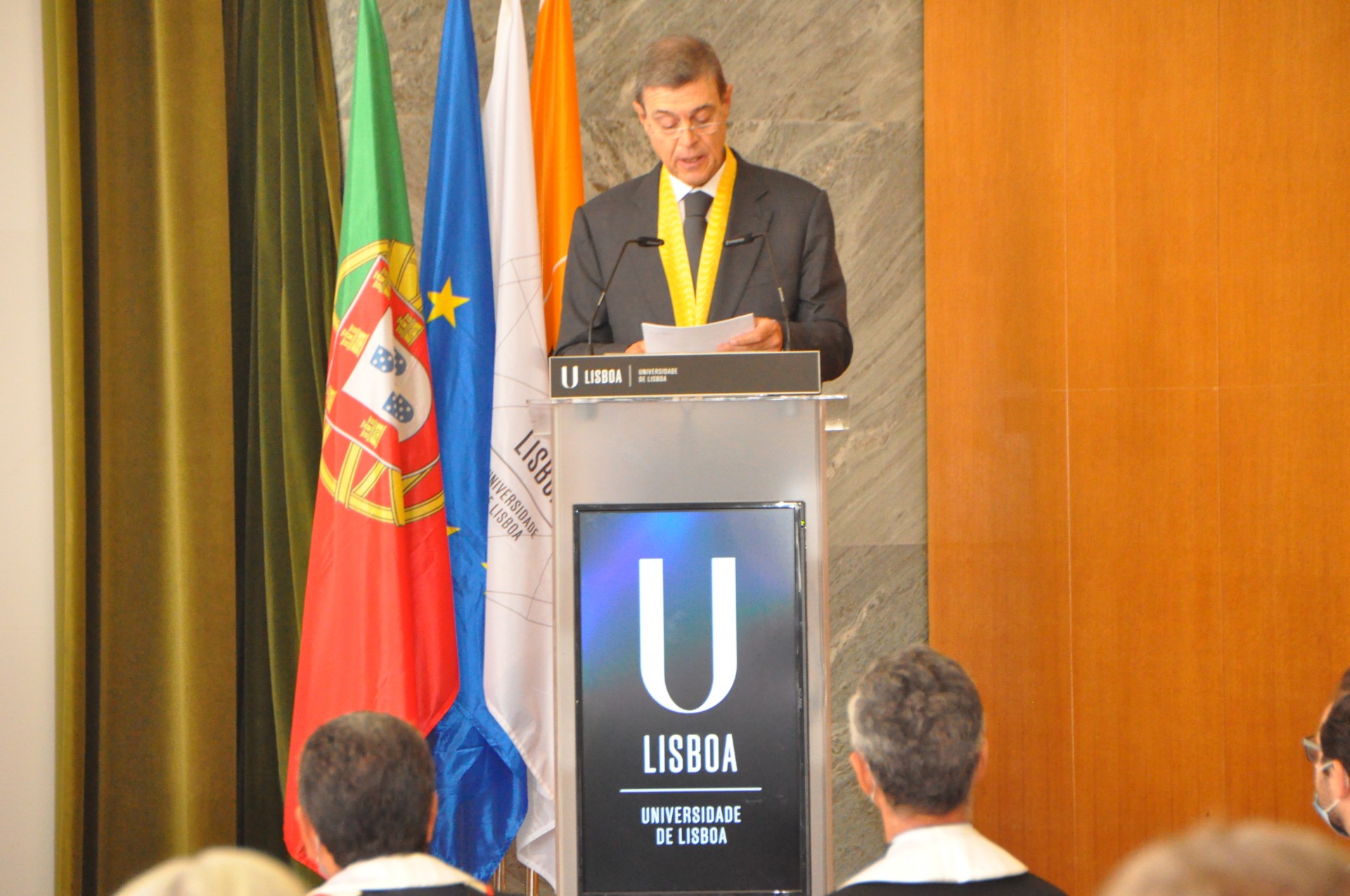 The event was started by the President of the Scientific Council, Melo Cristino, Full Professor at the Faculty of Medicine of the University of Lisbon, and godfather of the laureate Luís Portela, who made a point of highlighting the unique contribution of the former executive president of BIAL [ to “the development of academic medicine, health, entrepreneurship and culture in Portugal”. 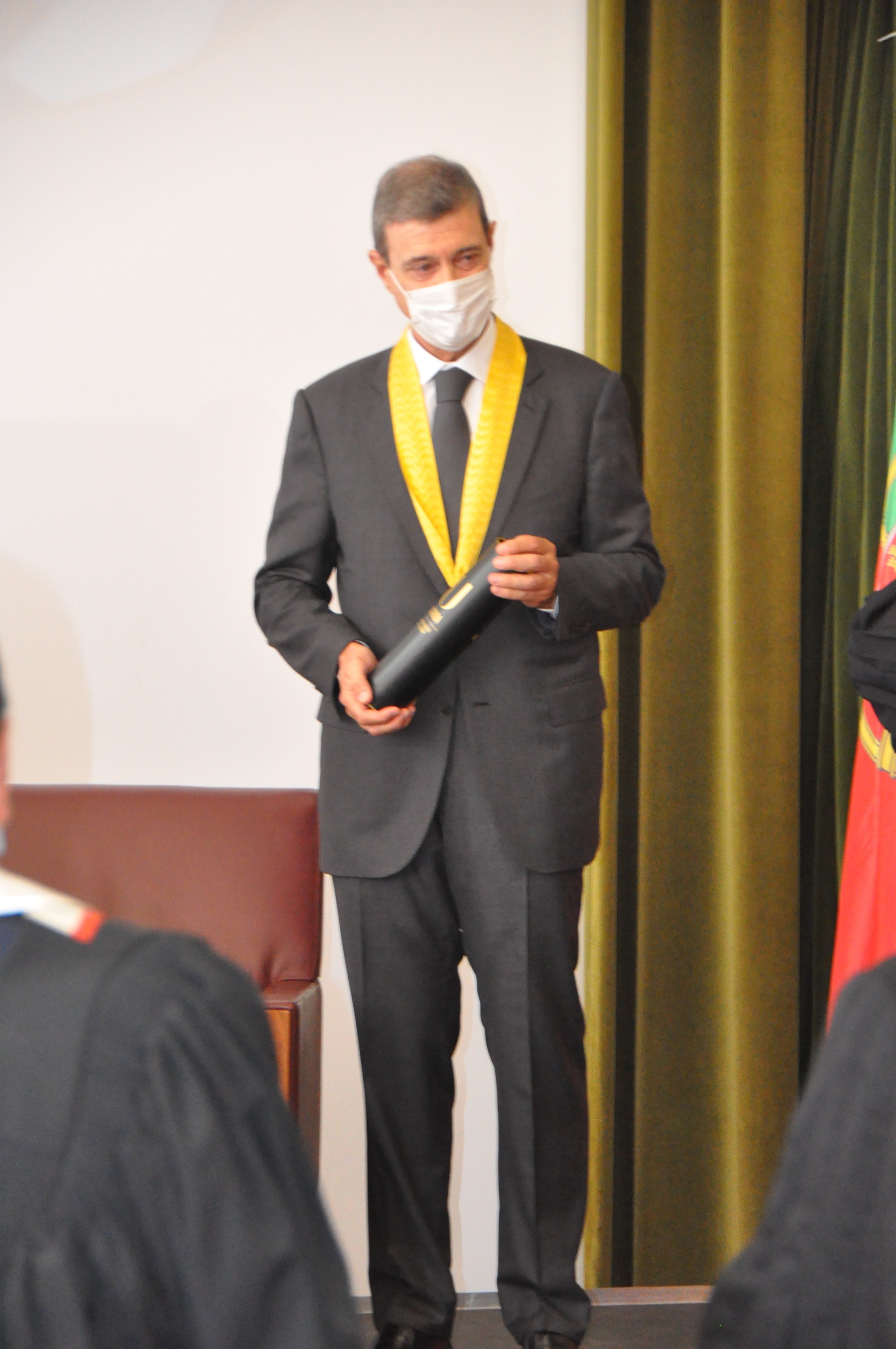 Luis Portela graduated in Medicine at the University of Porto and practiced clinical activity for 3 years, having also taught at the Faculty of Psychology for 6 years, where he was responsible for Psychopharmacology. At the age of 21, he had an active management role at Bial, currently one of the largest Iberian pharmaceutical companies, inherited from his father and grandfather. A few years later, and not yet 30, Luís Portela became the Executive President of Bial, a position he held until 2011, when he became Non-Executive President.

His curriculum is extensive: Vice-President of the Serralves Foundation and President of the General Council of the University of Porto, he was Commander of the Order of Merit, from which he later received the Gran-Cross. He was also Professor Honoris Causa at the University of Cádiz, in Spain, and at the Universities of Porto and Coimbra, in Portugal. He was granted the Neuroscience Award from Louisiana State University, US. He has written several books that were bestsellers, where he expressed his connection to more sensory areas. He is currently President of the Advisory Board of the Portuguese Institute of Oncology Francisco Gentil in Porto. 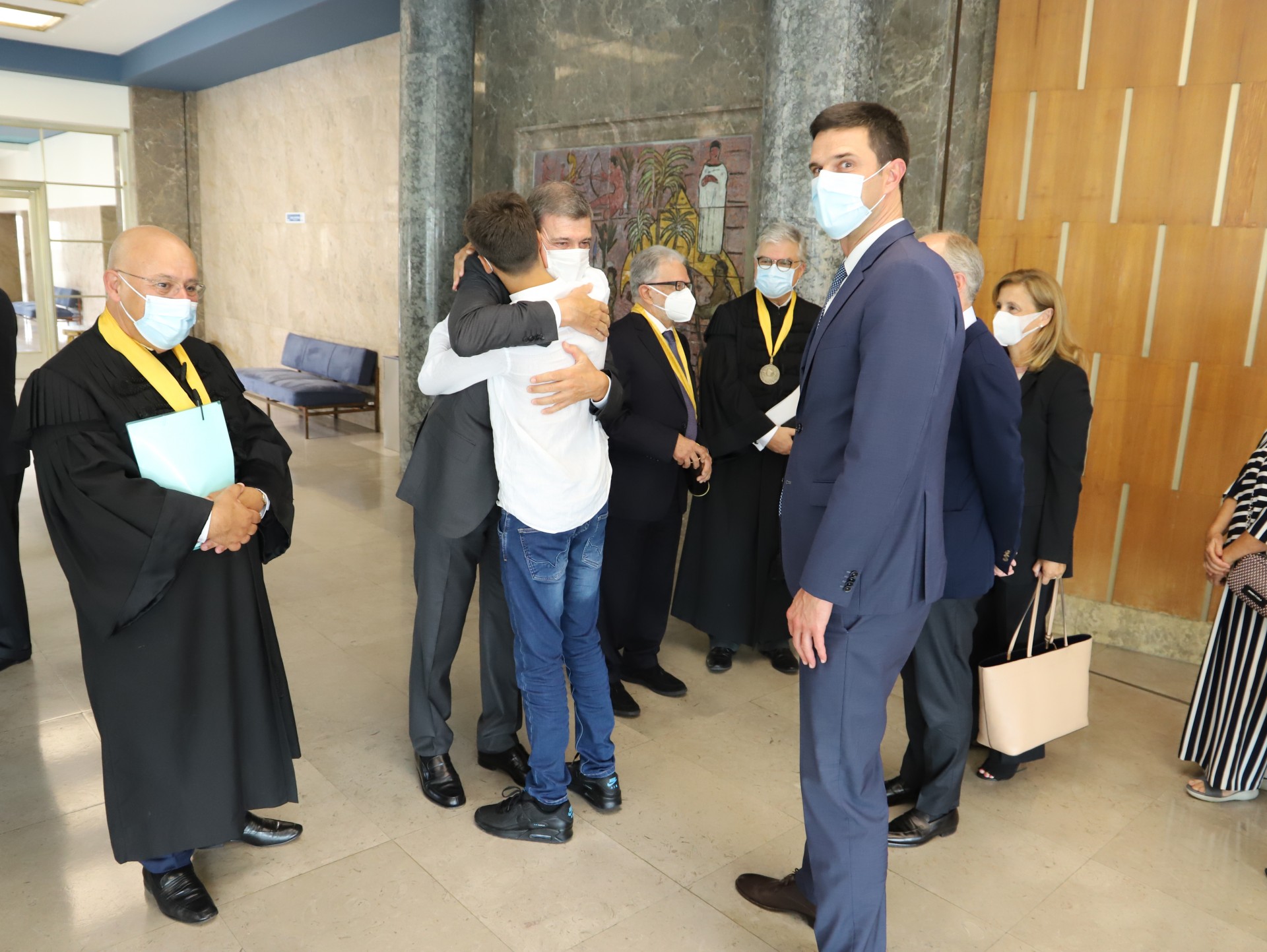 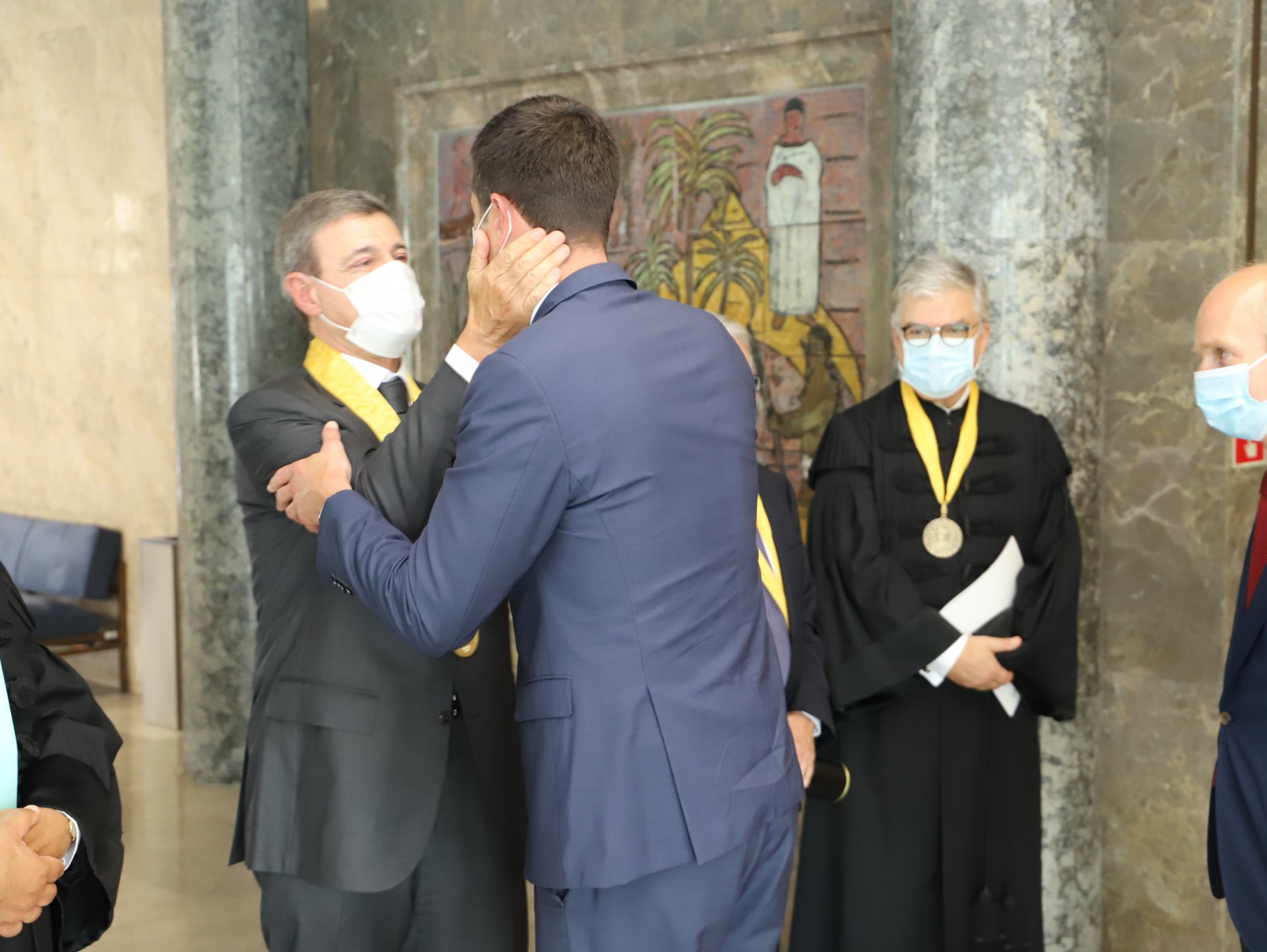 He became the face of BIAL. Focused on studying and improving the quality of life of human beings, in 1994, together with the Council of Rectors of Portuguese Universities, Luís Portela headed the leadership of the largest international pharmaceutical company of Portuguese origin, present in 60 different countries. Throughout its history, it has employed more than 1000 employees, 500 of which in Portugal. Responsible for the attribution of numerous scholarships to encourage studies in these scientific areas, the Faculty of Medicine alone received 8 scholarships. 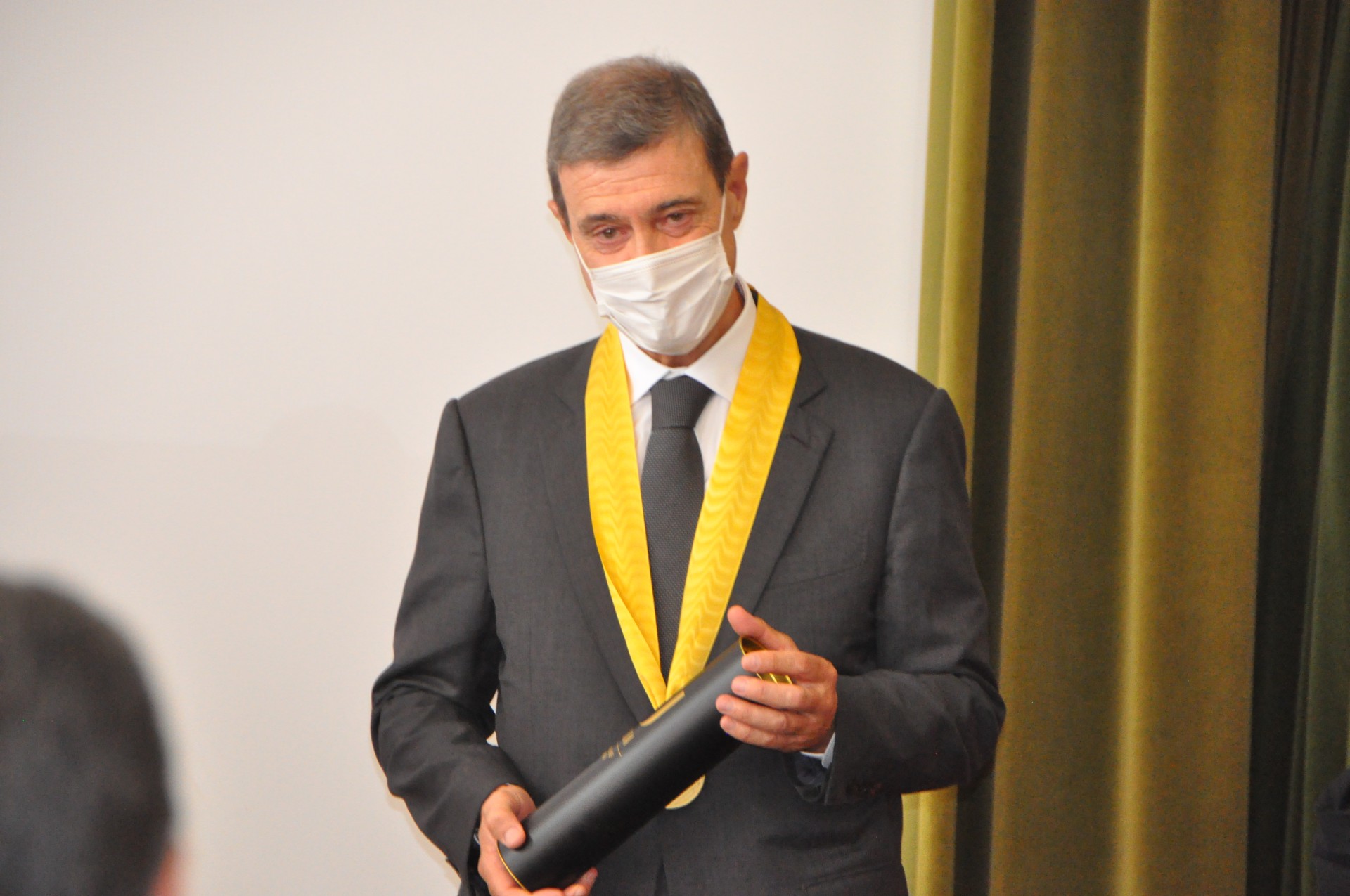 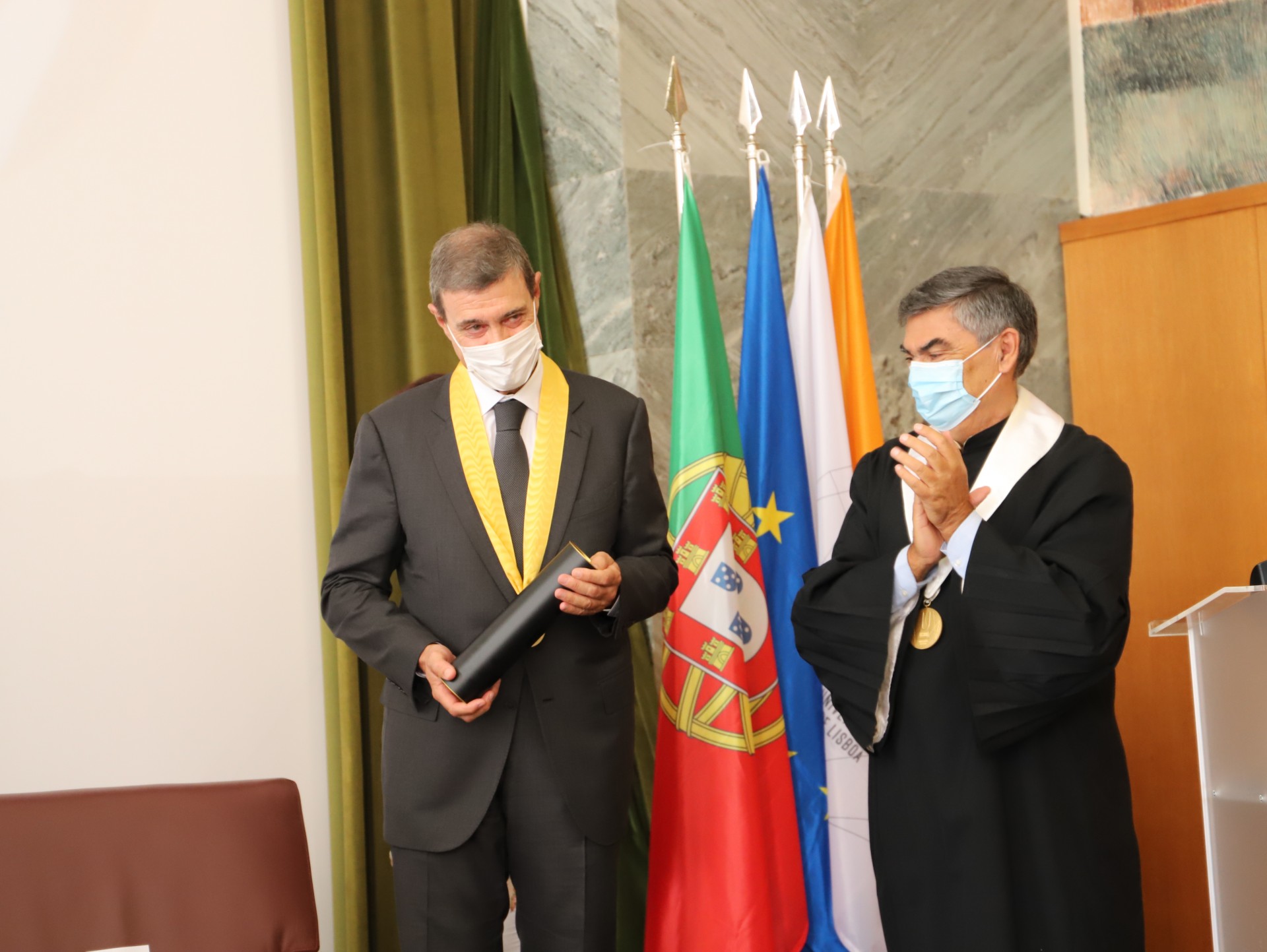 Certainly one of the most influential Portuguese people of the last 25 years, he received this new distinction expressing his “feeling of gratitude, primarily to the Rector of the University of Lisbon, to the Director of the Faculty of Medicine and to the President of the Scientific Council”, not missing out on the opportunity to praise the Professor of Brazilian Medicine, Jorge Alberto Costa e Silva, before talking about himself.

In his 70 years of life, with some controlled emotion,  Luís Portela did not forget all those who helped him on his path, professionally, but also as a human being. He began by thanking his mother Rosa and his father António Emílio, the childhood teachers, his father's Cardinal friend, and the pharmacist, his father's right-hand man. He spoke about  his development as a young man and as an adult, attentive to the world, who noticed an excess of detachment and materialism in humanity. This is why he always interspersed curiosity between faith and spirituality. According to him, the permanent search to enrich his own spirit asked him to focus, through Science, on the spiritual development of others. Losing his father early gave him two great missions: taking care of Bial, which had been in the family since his grandfather Álvaro, and going beyond the obvious of materialist humanity. To take part of Bial's shares, he had to rely on a loan from the couple who were his mother Rosa's best friends, at “no interest and no term”. 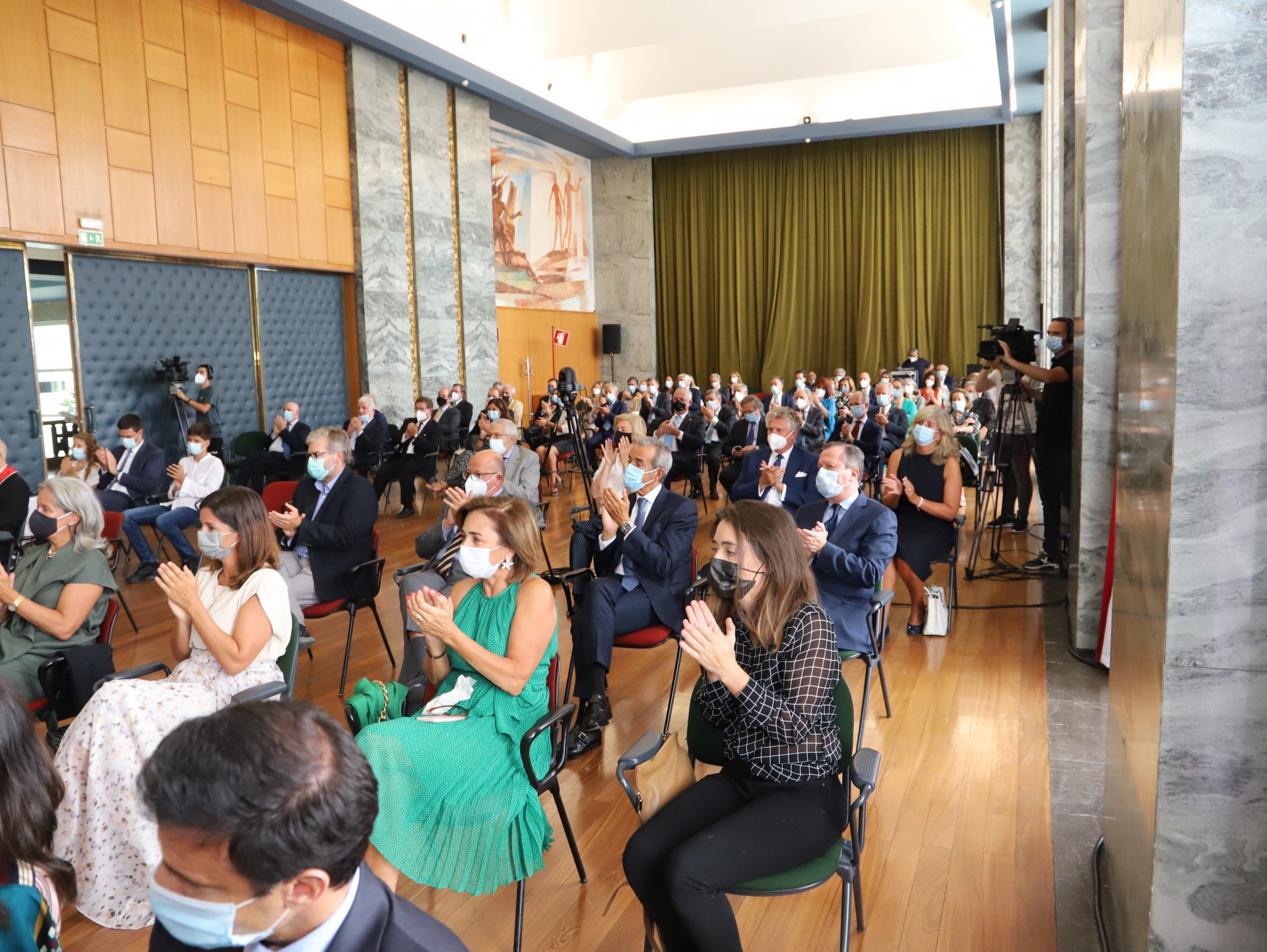 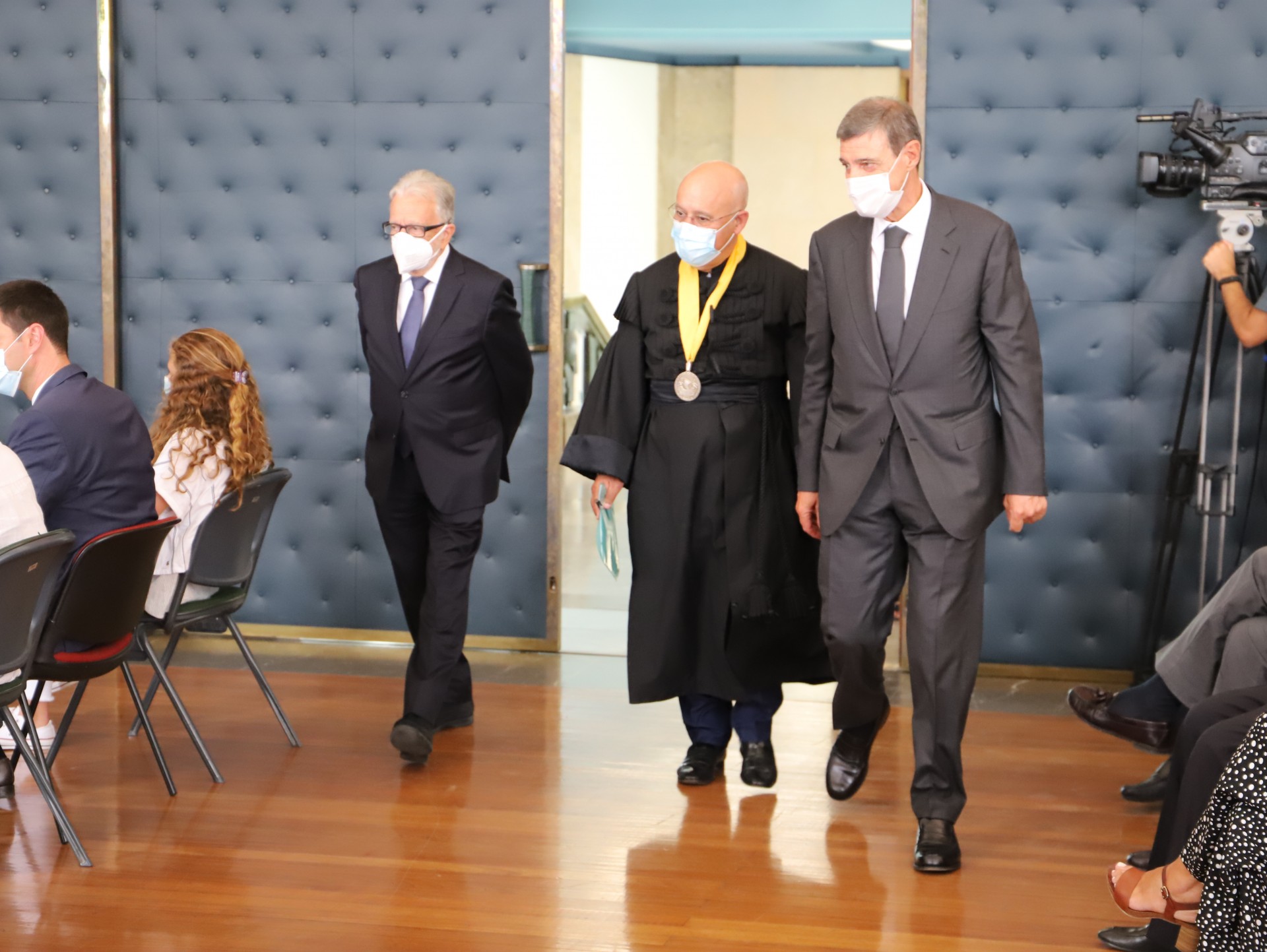 So many “intrinsically good people followed, who fuelled my dream of making Bial grow and creating drugs”. “Captain of a fantastic team that took the first Portuguese medicines to the world”, the 1000 employees were not forgotten. Having handed over the legacy in the hands of younger generations, the great name of Bial was not shy about showing extreme pride in his sons António and Miguel. No less moved, he recalled some of the brilliant minds who worked with him and helped to place Bial and friendship at the level of excellence it is known today: Fernando Lopes da Silva, Maria de Sousa, António Damásio, Daniel Bessa, and Nuno de Sousa.

The people who are interested in others and listen to them in a disinterested way, including readers and those who invest in knowledge, those who have left and those who admire him, 5 children and 8 grandchildren, and finally his great passion, his wife, all were celebrated in the tribute to Luis Portela. 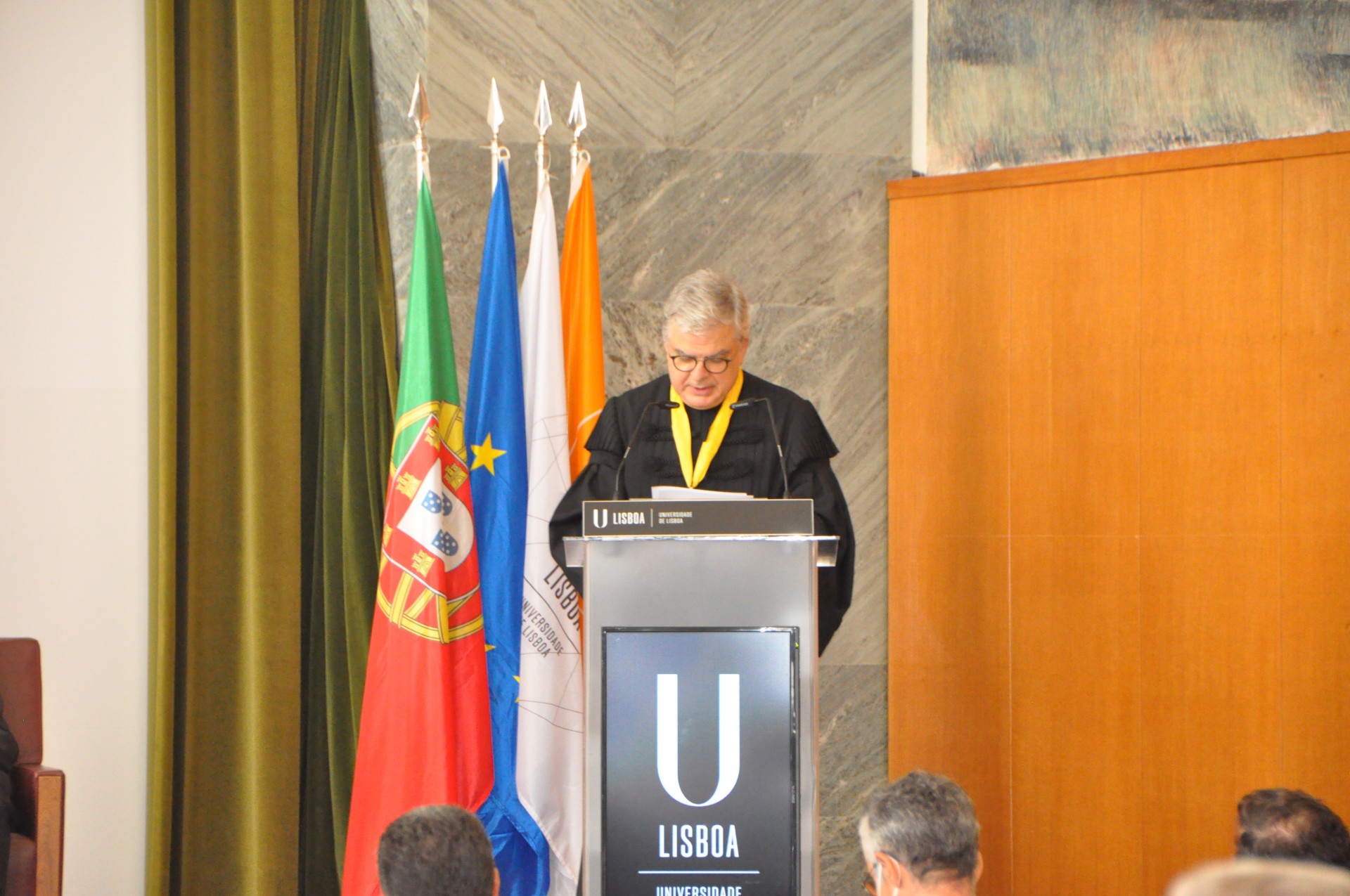 Following an emotional testimonial, the ceremony continued with an honourable presentation by Professor Fausto J. Pinto, (Professor and Director of the Faculty of Medicine of the University of Lisbon) on the main achievements of Jorge Alberto Costa, for whom he assumed the role of godfather of the Honoris Causa Doctorate Degree.

Jorge Alberto Costa e Silva was born on 26 March 1942, in Vassouras, in the state of Rio de Janeiro, to Jorge Carvalho and Etelvina Costa e Silva. He comes from a family of doctors and artists: his father was a doctor, his grandmother a musician, his grandfather was a painter and set designer, and his great-uncle Jacinto Benavente was the winner of the Nobel Prize for Literature. He guarantees that all of them have contributed to his interest, from an early age, in literature and medicine.

He graduated from the Faculty of Medical Sciences of the State University of Rio de Janeiro (UERJ) in 1966 and specialized in Scientific Methodology at the Karolinska Institute in Stockholm, Sweden.

He began his teaching career as Assistant Professor of Psychiatry at the Faculty of Medicine of the State University of Rio de Janeiro and became Professor after sitting public exams (1979). He was President of the Department of Psychiatry and Director of the Faculty of Medical Sciences (1980-1984), and was responsible for the creation of the Psychiatry service of the University and was involved in the implementation of the Department of Social Medicine. At UERJ, he created the international psychiatry programme, thus marking the beginning of the participation of Brazilian psychiatry in the international scenario. He was also Professor and Vice President for International Affairs at the University of Miami, as well as Professor and Chairman of the International Centre for Mental Health Policy and Research at the New York University School of Medicine and “Senior Scientist” at the International Mental Health Prevention Centre (NY). 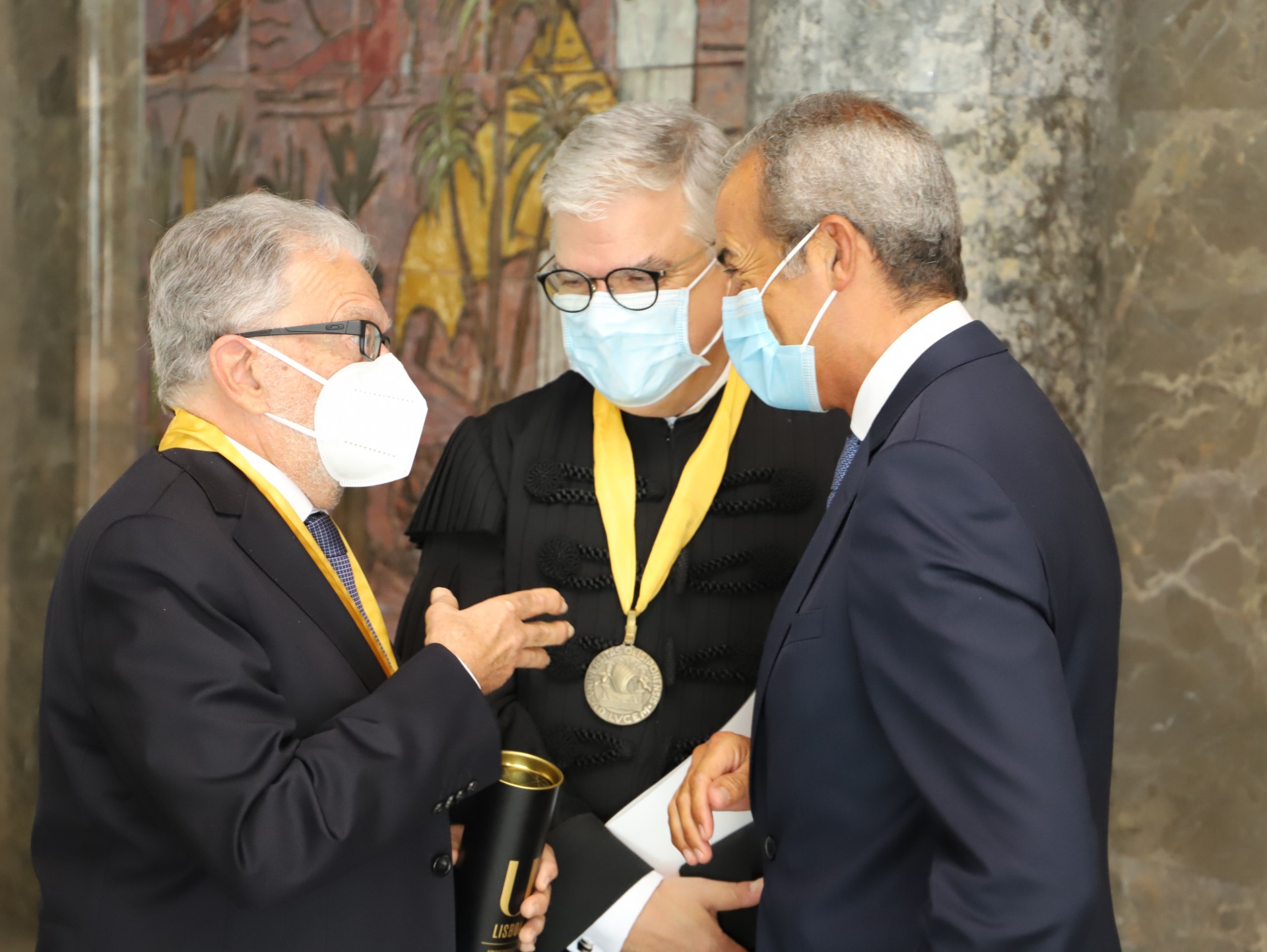 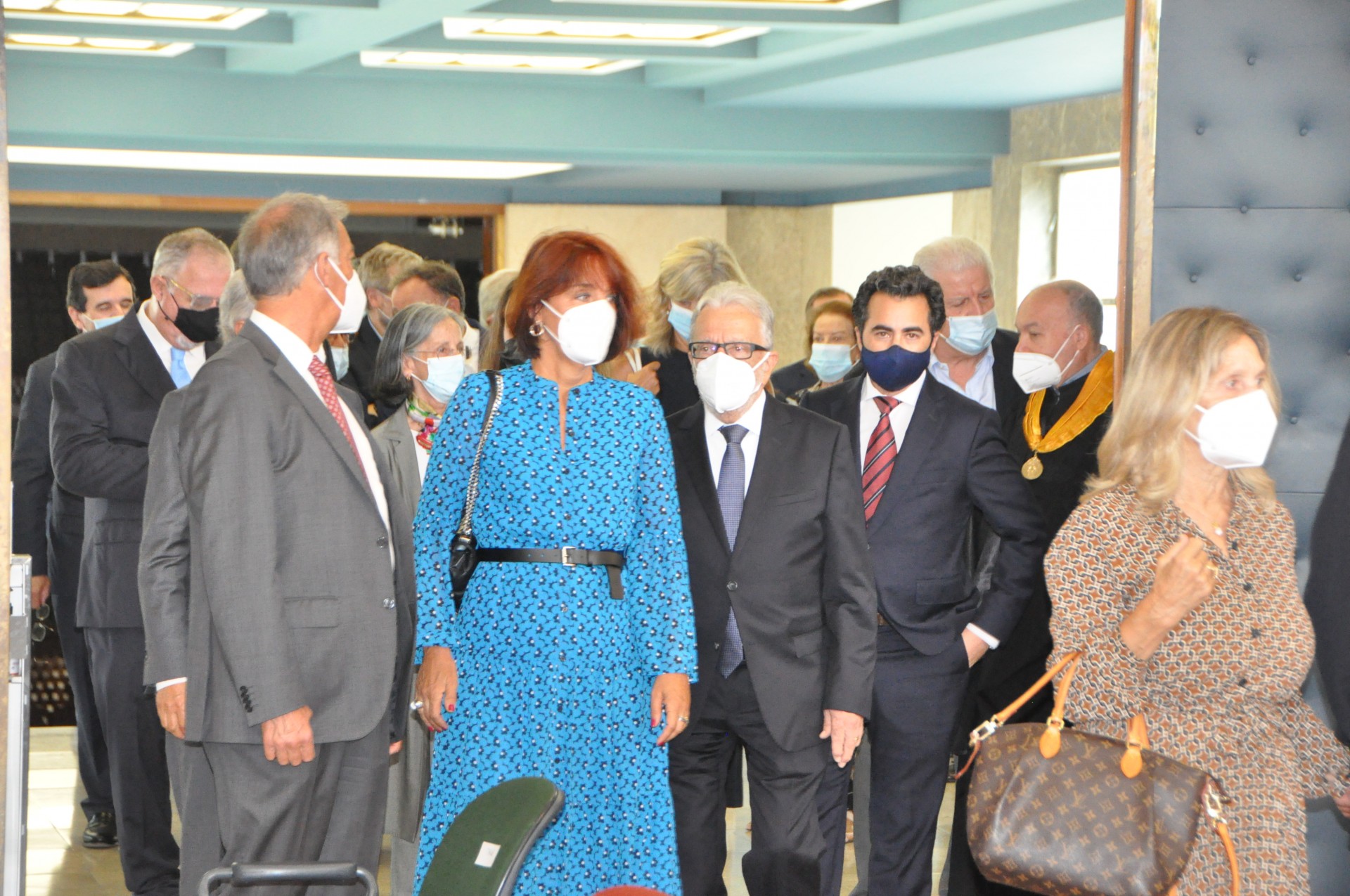 Jorge Costa e Silva enabled internationally renowned professionals in the field of psychiatry and mental health to have on-the-job training for psychiatrists and mental health professionals in Brazil. The psychiatrist has generated scholarship programmes that for years have made it possible for young doctors to study in other countries, such as the US, Portugal, Spain, France, Italy, United Kingdom, Sweden, Canada, Switzerland, and Germany, among others.

As International Director of the World Health Organization (WHO ICD-10, 1993), he created a mental health programme for disadvantaged populations called “Nations for Mental Health”. While at the WHO, he led the “Tobacco and Health” group, dedicated to reducing the long-term impact of smoking on smokers and non-smokers. One of the group's main approaches was the ban on indoor smoking, starting with bans on airplanes. To further boost this initiative, the award was given to the first airline director who carried out the ban on all flights operated by the company. This work culminated in the Framework Convention against Tobacco in the World (2003), to which virtually all countries in the world are signatories. In 1994, the WHO managed with the IOC (International Olympic Committee) to ban cigarette smokers in the Olympic Games.

At New York University, he participated in the creation of the International Centre for Health, where, in addition to other projects, he developed a myopia treatment programme during puberty, which mainly reached young people from countries such as the former Zaire (now the Democratic Republic of Congo) and Zimbabwe, where these young people, excluded from the classroom, became a risk group for the co-option by the war forces of the conflict carried out by the two countries. In this same motto, Dr Jorge Alberto Costa e Silva developed a series of programmes on school learning disorders, carried out at the Instituto Brasileiro do Cérebro (Brazilian Brian Institute), which he founded.

He received many awards and honours, such as the “Chevalier dans l’Ordre National du Mérite” from the French Government (Vice-President of the Association of this Order in Brazil). He was also awarded the “Legion d'Honneur” by the French Government and “Doctor Honoris Causa” by the National University of Asunción in Paraguay, the University of the Republic of Uruguay and the Brazilian Academy of Philosophy in 2010. He is Honorary Citizen of the City of New Orleans in the United States and of the City of Hamburg in Germany. He was also awarded the “Medal of Medical Merit” by the President of Brazil and is “Doctor Honoris Causa in Humanities” by the International Writers and Artists Association.

He was designated “Grand Oficier” by the l’Ordre Souverain of Saint Jean of Jerusalem as well as “Chevalier de l’Ordre de Malte”. He is Ambassador at Large of the Principality of Malta. He received the Commendation of Medical Merit  from the Brazilian Federal Government and the Clementino Fraga Medal from the Government of the State of Rio de Janeiro. He was awarded the “Great Cross of Justice”, granted by the International Organization of Judges, in recognition for his actions regarding social justice, politics and world peace through his scientific, educational, medical and jurisprudence work.

In October 1999, at a World Psychiatric Association congress held in Hamburg (Germany), 10 recognized psychiatrists from different countries were selected to receive the title “World Leader in Psychiatry”, with Dr Jorge Alberto Costa e Silva being the first psychiatrist in the southern hemisphere to receive this award for his contributions to the progress and development of this specialty in that decade.

Due to his relevant contributions, not only in Psychiatry, but also in Mental Health, he received two work visas that he considered to be very important: O-1 Visa by the United States Government and the Talent Passport by the French Government. Both are given only to people with extraordinary abilities, such as for example: scientists, researchers, professors, technology experts and inventors.

In his speech, Jorge Costa e Silva said that “it is a moment of great pride and satisfaction to receive this recognition, the most important award that a doctor can receive, Doctor Honoris Causa, by one of the most important universities in Europe and the world.”

The psychiatrist referred that “this moment is not only of glory, but above all of gratitude”, addressing the Rector of the University of Lisbon, Professor António Manuel da Cruz Serra; the Director of the Faculty of Medicine of the University of Lisbon (FMUL), Professor Fausto Pinto and all the advisors who voted on this title, and also his family.”

“This is a title of honour”, stated Jorge Alberto Costa e Silva. 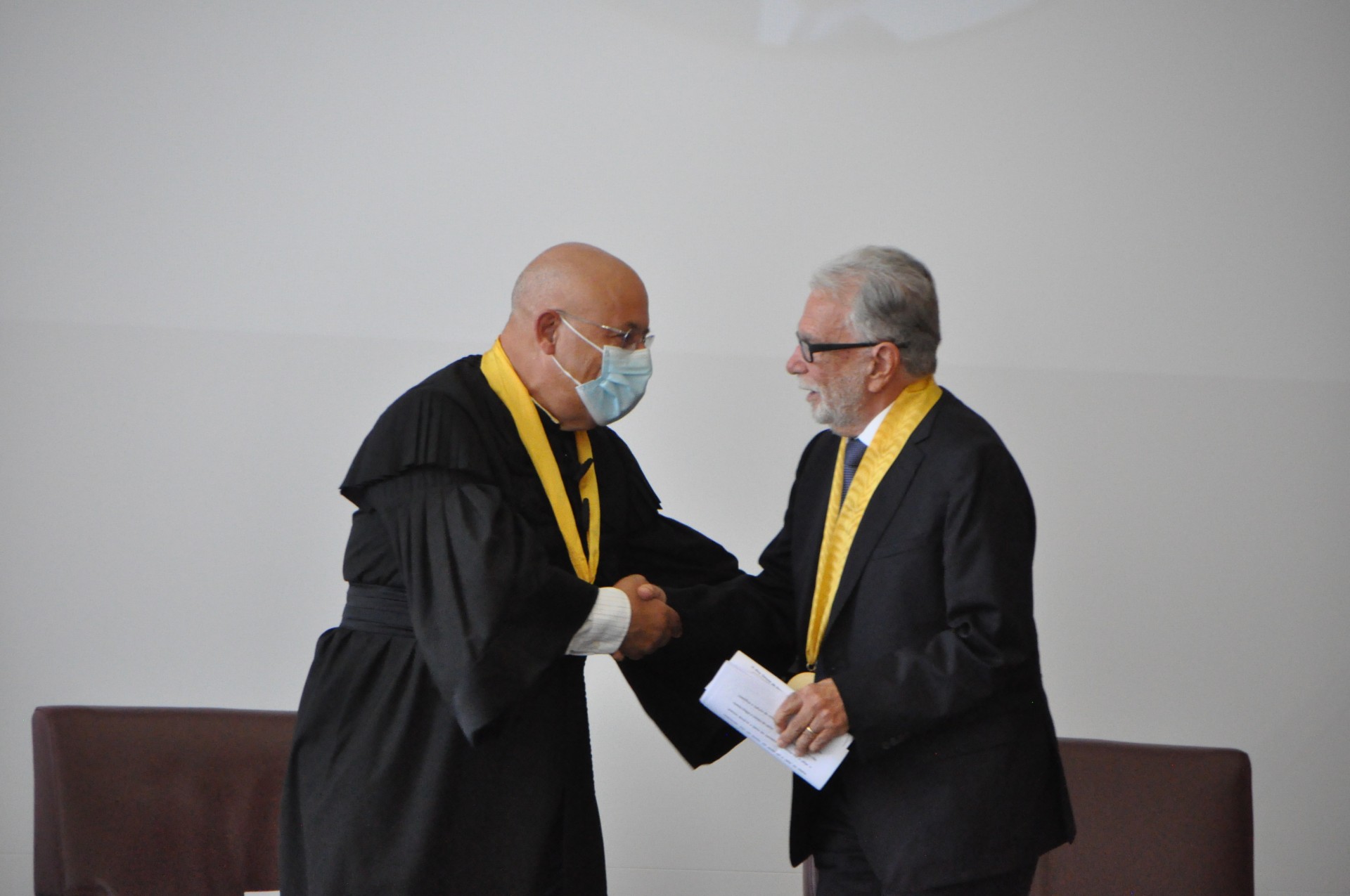 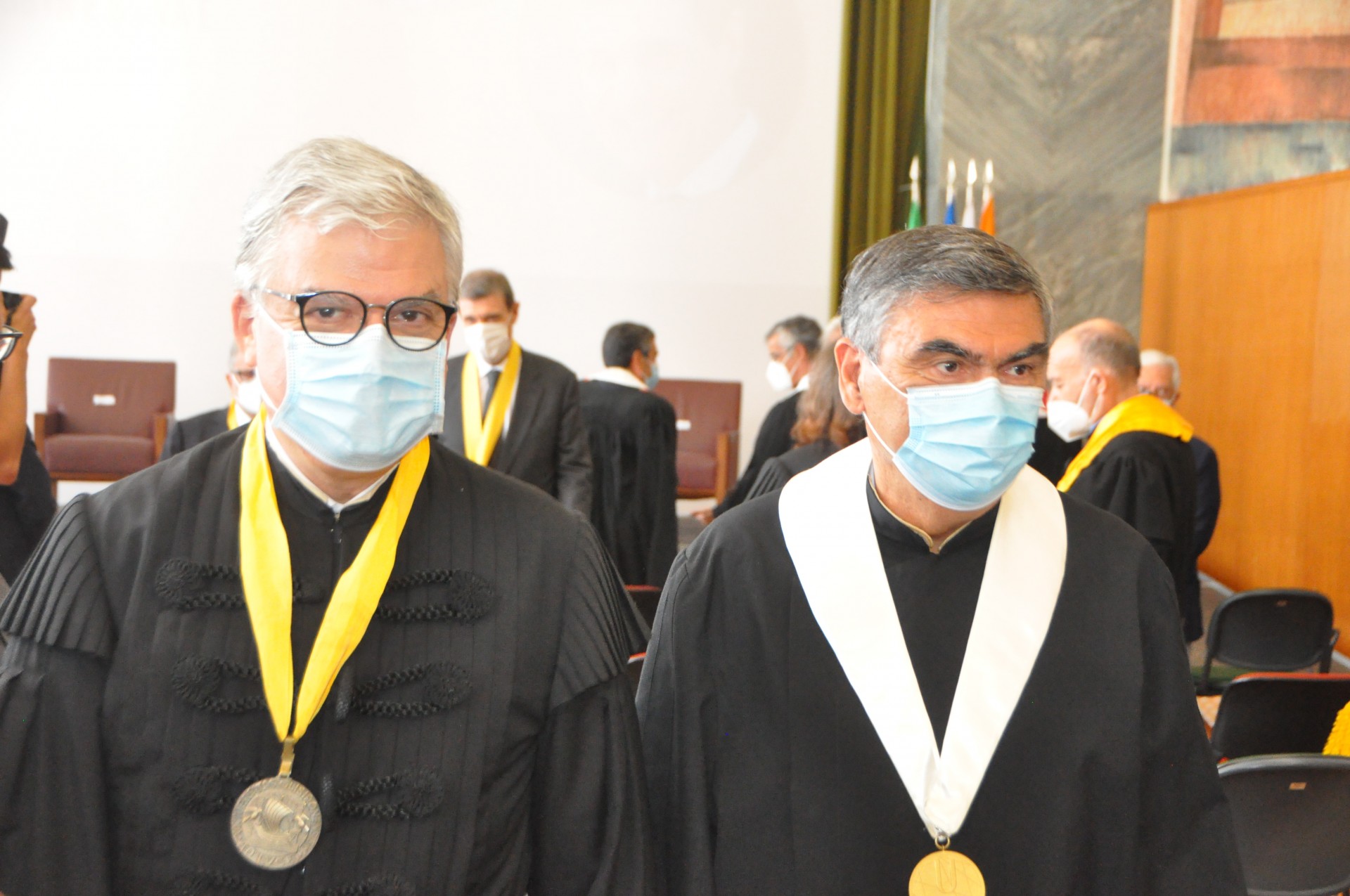 The State Advisor, the President of the Council of Rectors and other Rectors, Directors of other Medical Schools, the Presidents of the Medical Association, Pharmacists and Dietitians, representatives of Infarmed as well as of various Foundations and Institutes were also present at this ceremony.