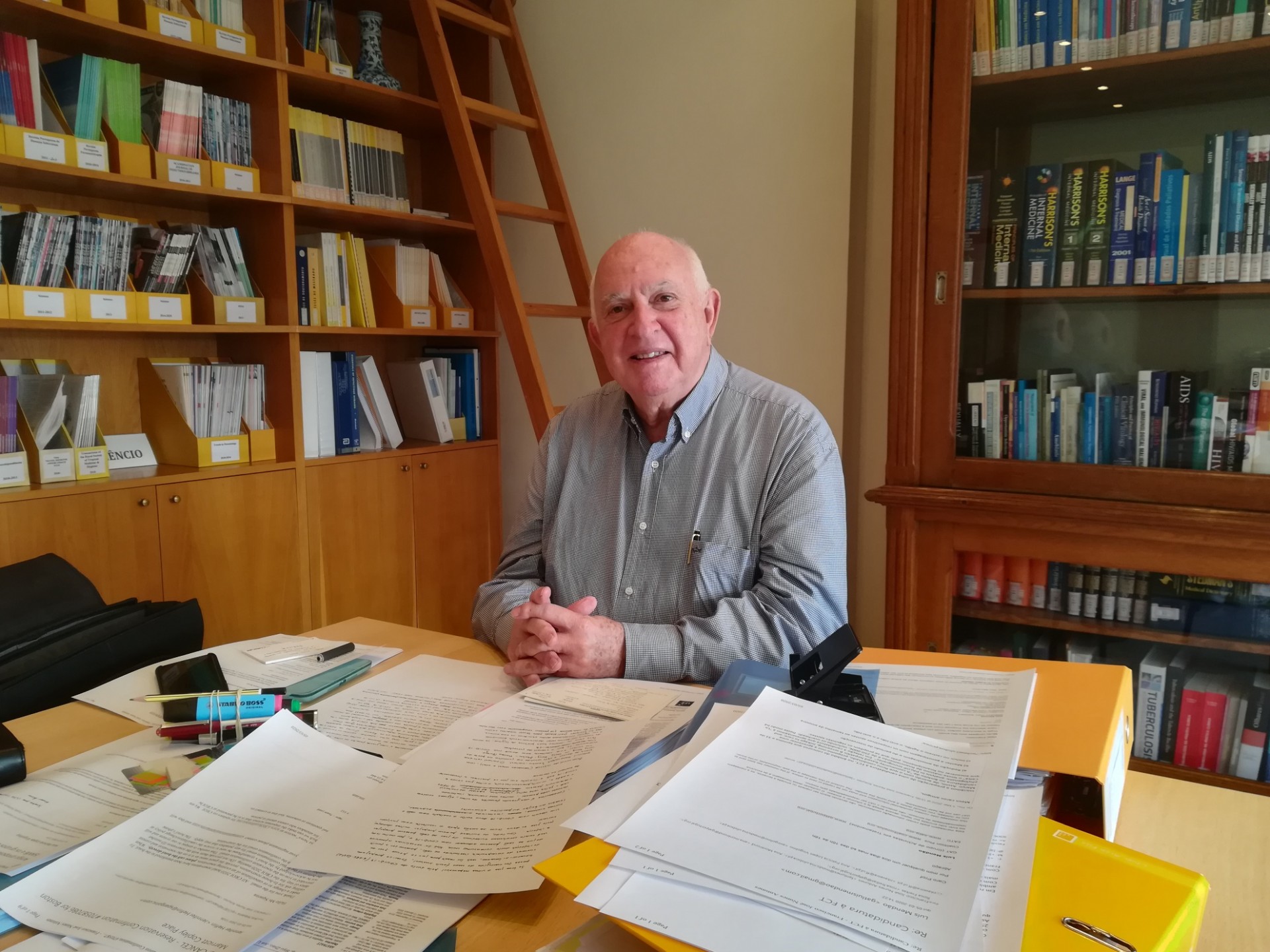 On 31 December  2019, several cases of pneumonia caused by an unknown agent were diagnosed in the city of Wuhan, China. The agent, a new coronavirus, has been designated SARS-CoV-2 and is extremely infectious. It has spread very quickly around the world, with a fatality rate much dependent on age and the comorbidities associated with ageing (cardiovascular, renal, pulmonary diseases and diabetes). The lethality rate in children appears to be insignificant, in young adults is around 1%, in the age group of 60 years rises to 4%, in the age of 70 increases to 9% and above 80 to 18%. Overall, the fatality rate is estimated to be 3%. However, the number of asymptomatic infected or with mild symptoms may be much higher than that officially reported, which may lead to a reduction in the current lethality rate, which is provisional. The countries that test the most, such as South Korea, report much lower lethality rates than those that test less, such as Spain, the United Kingdom and the United States of America, for example.

In Italy, the lethality rate is much higher (8.3%) than the global average, given that the majority of those infected are not counted, have a relatively elderly population and the health system is overloaded with the high number of cases. The reproducible number of the infection (R0), which corresponds to the number of cases generated by a single infected person, in a population where all individuals are susceptible, is estimated at 2-3.

Although a great effort is being made to reuse licensed (antimicrobial) drugs for other diseases, in particular those with anti-inflammatory effects, such as chloroquine or hydroxychloroquine, as a temporary solution, hopes lie on the development of vaccines.

What are the challenges of a SARS-CoV-2 vaccine

SARS-CoV-2 is a completely new virus for the majority of the population, so there is no prior immunity, unless there is cross-reaction or sharing of viral antigens with other strains of coronavirus that circulate in humans. Contrary to what happens with the seasonal flu, in relation to SARS-CoV-2 this does not seem to be the case. Thus, unlike what happened with the H1N1 pandemic flu in 2009, when the manufacturers of vaccines for seasonal flu switched rapidly from the production of the trivalent seasonal flu vaccine to pandemic monovalent vaccines, in this case of SARS- CoV-2 the answer can be more complex, since there are no vaccines or processes for their production. Regarding other coronaviruses that are highly pathogenic to people, such as SARS-CoV-1 and MERS-CoV, in the first case, the process of developing a vaccine was interrupted, given the eradication of the virus by non-pharmacological interventions, when the number of infected people was still low (however, the results of phase I clinical trials were encouraging, given the demonstrated safety and immunogenicity). As for vaccines for MERS-CoV, they are still in pre-clinical and clinical development. In vaccines for SARS-CoV-1 and MERS-CoV, the target is the S protein in the envelope of these coronaviruses, which mediates the binding of the virus to host cell receptors (ACE2, the angiotensin-converting enzyme), followed by fusion of the viral and endosomal envelopes with the release of the viral RNA, and then the viral replicative phase begins. Due to the knowledge of the development of vaccines for SARS-CoV-1 and MERS-CoV, protein S on the virus surface was considered the ideal target for the vaccine for SARS-CoV-2, given that antibodies that target this protein can interfere with its binding to ACE2, thus neutralizing the virus.

Vaccine technology has undergone significant advances in recent decades, including a series of developments in RNA, DNA, vector, recombinant, inactivated and attenuated - within the 117 vaccine candidates for SARS-CoV-2, the panel includes all 6 vaccine platforms (Vaccine Centre - London School of Hygiene & Tropical Medicine).

The development of a vaccine involves several stages, and they are evaluated mainly for their safety and protective effect, firstly in animals and then in clinical trials, in three stages: I - safety is analysed in a restricted number of healthy volunteers (for example, 40); II - the formula and dosage and proof of effectiveness are evaluated (for example, in 500 volunteers); III - again, the effectiveness and safety of a representative number of the population (for example, 5,000 individuals) are tested. If the results are promising, approval by the drug agencies (FDA, EMA and WHO) is requested, and there is large-scale production and distribution and, finally, immunization. The development of a vaccine can take months or years. However, in the event of an emergency, as was the case with the flu in 2009 or Ebola, and now SARS-CoV-2, this process can be compressed or accelerated to 6-18 months, but it is not known, everything depends on the results obtained, in terms of safety and protective capacity.

According to the World Health Organization, for a vaccine to be developed and licensed in the event of an epidemic, for administration to those at high risk for COVID-19, it must meet the following requirements:

- Suitable for all ages, including pregnant women and infants

- In a single dose, not more than two

- Protection granted for at least 1 year

- Preferably, administered through another route, other than parenteral (however this form is      acceptable, as long as effectiveness and safety are guaranteed)

- Others (does not require a cold chain, having high thermostability)

However, as mentioned, the majority of vaccines are under development in the preclinical phase and, even, with evidence of protection for the animal, it may not induce sterilizing immunity, as happened, in some cases, in the development of the vaccine for SARS- CoV-1. Sometimes, some vaccines with live viruses (attenuated or inactivated), caused severe pulmonary or hepatic lesions in the animal model and may also potentiate the severity of the infection. Therefore, it  is necessary to ensure that vaccines under development for SARS-CoV-2 are sufficiently safe.

Another relevant aspect related to the effectiveness of the coronavirus vaccine is the possibility of reducing the immune response over time. It is known that infection with human coronaviruses does not always develop antibody responses that are maintained for a long time and reinfection with the same virus is possible after an extended period of time (but only in a small number of individuals and mild or asymptomatic).

The antibody titers in individuals who survived SARS-CoV-1 and MERS-CoV faded after 2-3 years.

Re-infections are unlikely in the short term, but they can happen when humoral immunity declines over months or years. A vaccine for SARS-CoV-2 must overcome these aspects and ensure protection against the virus becoming endemic and causing recurrent seasonal epidemics.

Given that the most serious cases of COVID-19 occur in individuals over 50 years of age, it will be important to develop vaccines that protect this sector of the population. Unfortunately, the elderly are those who respond least to vaccination, due to immunosenescence. Protection for this population may require higher neutralizing titers than younger people.

The development of vaccines can take years. However, in emergency cases, the process, of experimentation in the animal model and the three phases of clinical trials, can be compressed and accelerated, running, in parallel, the preparations for large-scale production of the vaccine.

More than a hundred vaccine candidates are under study and, to date, around a dozen have started clinical research, phase I, and, if safety is assured, will move on to phase II in the late Spring and finally phase III.

If the vaccine meets all the criteria for efficacy and safety, it will have to be subject to the approval of the competent authorities, after which it can be distributed for vaccination. This clinical research process has a minimum duration of 6 months (if the recruitment of volunteers is able to meet the established deadlines) and, to be realistic, the vaccine may then be available in the next 12-18 months.

The accelerated development of the vaccine for COVID-19 may not guarantee sufficient safety and the effectiveness may not include the population more susceptible to developing serious illness, such as those over 60 years of age. The main beneficiaries may be the youngest, with the possibility of achieving group immunity, the result of which may be the disappearance of SARS-CoV-2, as long as the vaccine immunity is guaranteed for a long period of time (it is not yet known which it is) and that reinfection is not introduced into a susceptible host population. On the other hand, it is hoped that the virus will not mutate in such a way that memory immunity fails to recognize it.

For this outbreak of SARS-CoV-2 it will not be possible to have this preventive measure available, but it can be useful if new outbreaks occur or if COVID-19 becomes seasonal, as with the flu virus.