Leading by vocation, for the sake of the greater good

It was in a live presentation open to the public that the Operating Theatres Leadership and Perioperative Practice Management course officially started, exemplifying the strong partnership between the Faculty of Medicine of the University of Lisbon and the University of Cambridge.

In a training aimed at the management of teams in the operating room and which intends to reinforce leadership tools in situations of great tension and responsibility, listening to Vice Admiral Silvestre Correia, from the Portuguese Navy, reinforced the certainty that leadership criss-crosses everything.

What can doctors and nurses take from an example of Leadership on board? The question can be as intriguing as it is appealing to the curiosity to clarify that there are several common bridges. Let us start with the end that tells us, unequivocally, that it is human life and its defence that explain actions that, perhaps, require sacrificing some decisions.

Whether on solid ground in the operating room, in floating situations and in the face of combat strategies, or surveillance, leadership follows a hierarchy of responsibilities and the voice of command, especially in extreme situations, but it also implies thoughtful and meticulous management of emotions.

With 30 years of experience at sea and having taken on missions whose management of about 2500 people implied international cooperation, the Vice Admiral stated that leadership formulas are always as incisive in praise as in criticism and warning.  Nevertheless, “the Commander, or the leader, alone, does nothing, because it is the people and their joint actions that originate the whole”. He also said that the sharing of the accomplished mission must involve all, with each person assuming his or her share of autonomy and responsibility. As the leader, “it is necessary to know the name of each person on the team, know their weaknesses and strengths and encourage them, when one realizes that they  may be losing motivation. When something goes wrong, the leader’s reaction to the error and saying what he does not like is equally important, he said. Whether in the face of error, praise, indecision, or some anguish about the outcome, “the leader must not show fear or insecurity when making decisions, because he has the role of calming both euphoria and defeats”. The leader, as a catalyst for hopes and wishes, also knows that he leads much better when he does not “unnecessarily invade the leadership levels that are not his own, but without ever leaving the feeling of indecision”. He concluded by saying “I have never met any indecision that would solve the problem”.

The commitment of the Faculty of Medicine to postgraduate training and the ever increasing scope of these training courses are precisely one of the main focuses of the FMUL Director, who could not be more confident in this new aspect of online training. He was the main coordinator in the area of Cardiovascular Emergencies. Aware that the world is undergoing a revolution in social interaction, Fausto J. Pinto believes that the revolution will also be on a digital scale, reinforcing the experience of the academy that has always been based on more face-to-face learning and is now conquering new areas. As a leader himself, he stressed that the management of expectations and the mediation of each one's frustrations are necessary conditions for those who care both for the sick and for people.

Vascular surgeon and Professor at FMUL, Luis Mendes Pedro set the tone for the great pillars of what leadership positions are and the profile of those who can and should occupy that place. In line with Faculty Director, he also believes that the “modern skills of a doctor include not just technical learning, but also psychological and emotional management skills”.

In the words of Carolina Britton, a Professor at the University of Cambridge, "this postgraduate training course will bring together a lot of experience".

“Whoever takes care of others, will take care of everyone”, or “gender equality in the Portuguese Navy”, were also some of the topics highlighted, in a meeting that included a final debate and that can be watched in full, here. 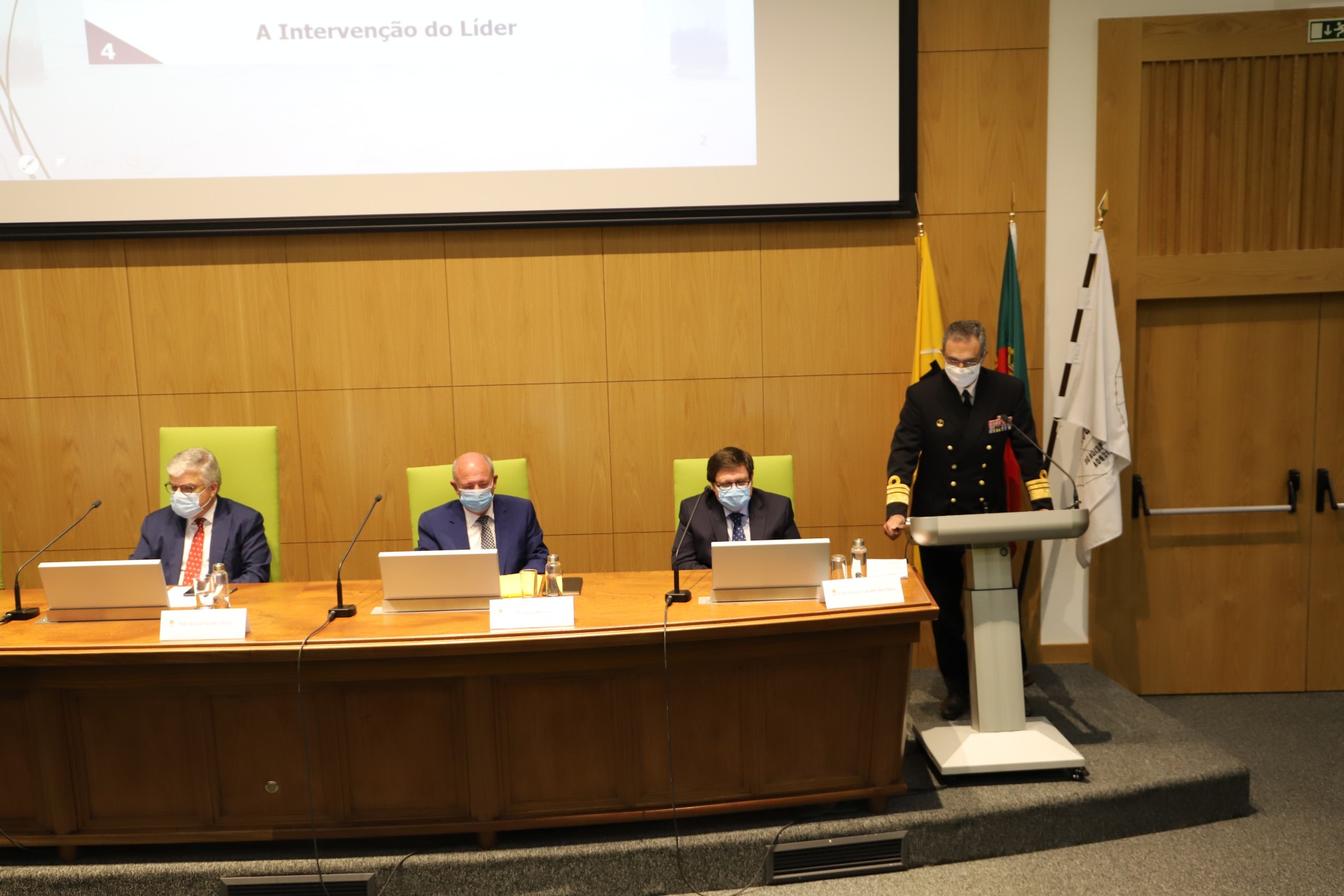 This inaugural conference of a course that is as pioneering as it is promising, was attended by the guest speaker, Vice Admiral Silvestre Correia, his two coordinators, Professors Luis Mendes Pedro (FMUL) and Carolina Britton (Cambridge), the Director of the Faculty of Medicine, Fausto J. Pinto and Carlos Martins, as organizer of Masterclass Online Courses.