Today, the exhibition “A Visit to the History of Diabetes at the Centenary of the Discovery of Insulin” was inaugurated, at the main entrance of the Central Building (1st floor). The event was attended by the Director of FMUL, Fausto J. Pinto, the person responsible for organizing the exhibition and President of the Ernesto Roma Foundation, Luís Gardete Correia, and also the President of the APDP (Association for the Protection of People with Diabetes in Portugal), José Manuel Boavida, in addition to some of our professors, namely, Professor Maria do Carmo Fonseca and Professor Francisco Antunes. 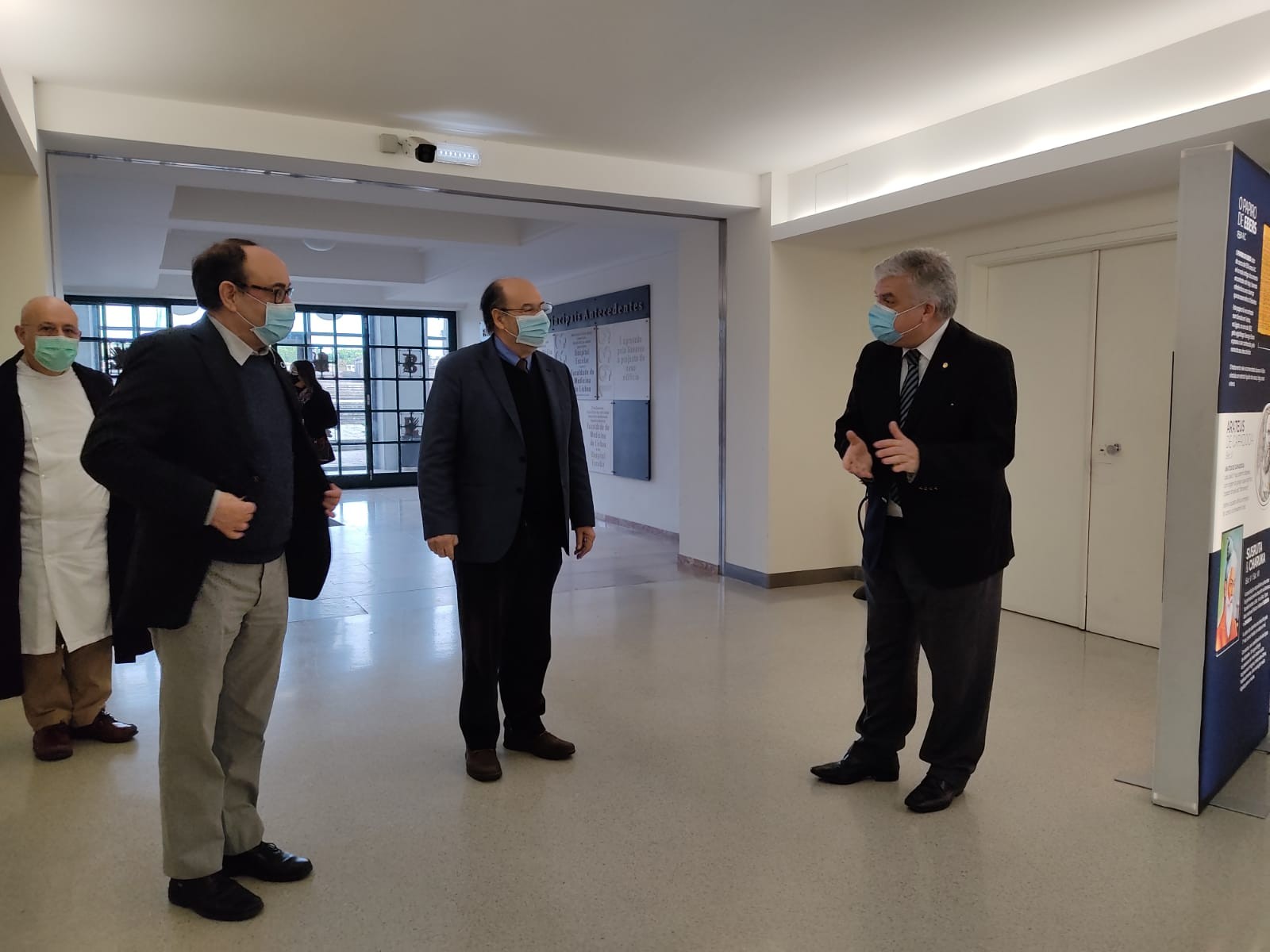 At the official opening of the exhibition, Professor Fausto J. Pinto expressed appreciation for the fact that the exhibition started at our Faculty, which trained not only the main people responsible for the initiative (Luís Gardete and José Manuel Boavida), but also Ernesto Roma, the doctor who was a pioneer in the treatment of diabetes in Portugal, as highlighted by Fausto J. Pinto in his inaugural speech.

In addition to "recalling the importance of the discovery of insulin", the Director of FMUL underlined the fact that it was a discovery that was the at the genesis of 3 Nobel Prizes, "and that its discoverers are controversial".

Highlighting “the link between scientific advancement and its impact on the treatment of a disease that was fatal at the time”, Fausto J. Pinto stated that “scientific and technological advances and their translation into clinical terms will continue to be an objective in Medicine”.

Despite all the advances, the reality of Diabetes in Portugal still presents “great challenges”, according to the Professor.

“It is a privilege to be able to launch an exhibition in an area as important as this and that, in the end, enriches what is one of the attributes of an academic institution, which is to promote knowledge and naturally help its dissemination so that we can continue to progress in scientific and medical terms, and build the best future for generations to come”, concluded Fausto J. Pinto, praising an initiative that dignifies the Faculty of Medicine of the University of Lisbon. 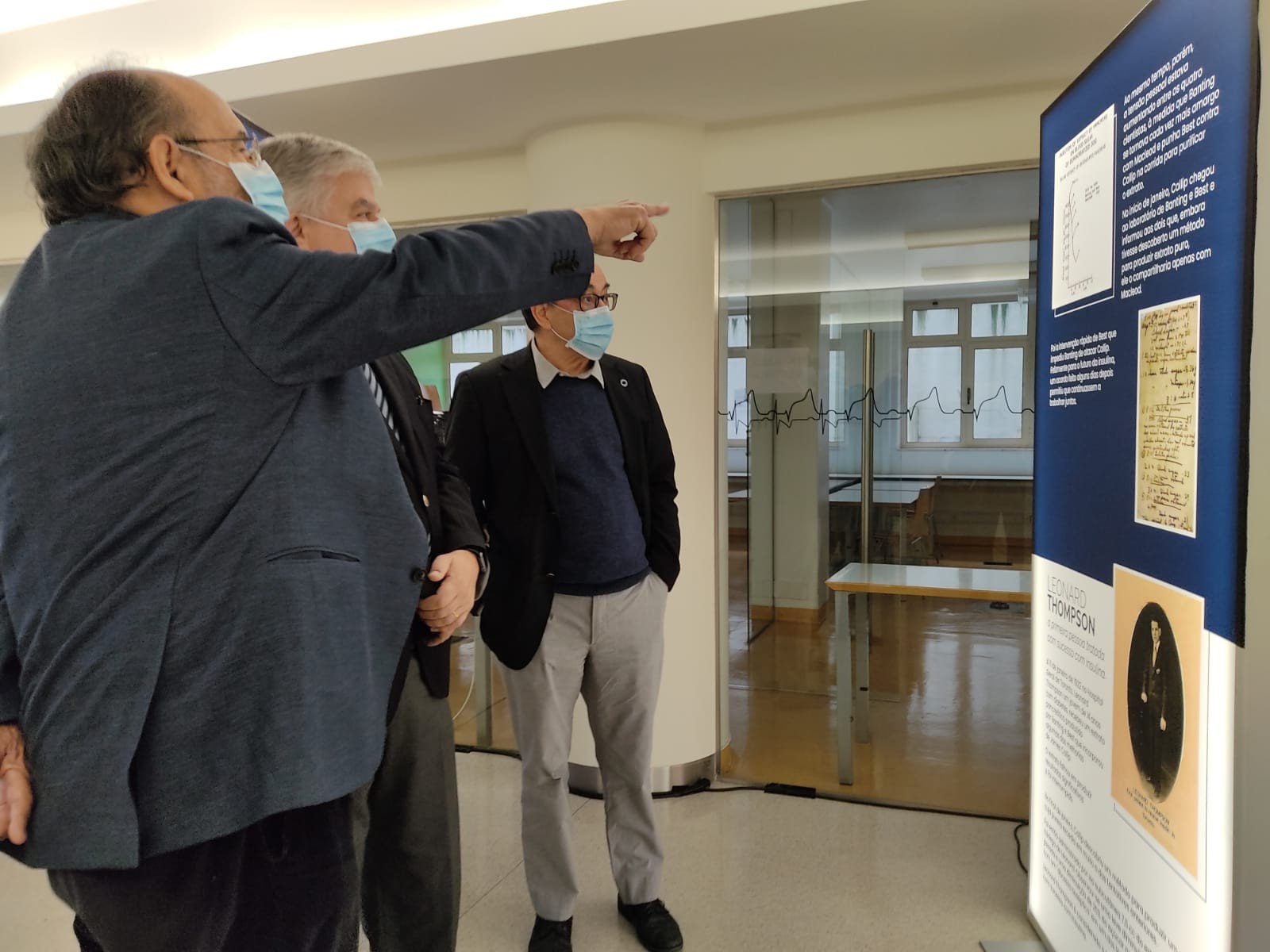 Taking the floor, Luís Gardete described a “doubly exciting” moment, when his passion for the study of history culminated in his return to the Faculty where he concluded the degree 52 years ago.

Luís Gardete highlights the fact that the discovery of insulin not only “gave people back their lives”, but also enabled “their integration into society”. “As we know, people died before the discovery of insulin and type 1 diabetes was prevalent. Type 2 diabetes was less prevalent and appeared mainly in wealthy groups at court”, he said, revealing that King D. Carlos suffered from type 2 diabetes.

Recognizing that there was a lot more History to tell, “we tried to make a historical summary, starting with the oldest description of Diabetes, then we went step by step pointing out small discoveries, because everything advanced in the late 19th century, beginning of the 20th century”, he explained, mentioning, in particular, the contribution of Paul Langerhans, as well as the “three individuals who have been forgotten and who should have had a small part of the Nobel Prize, Gley [Eugéne Gley], Zuelzer [Georg Ludwig Zuelzer] and Paulesco [Nicolae Paulesco]”. 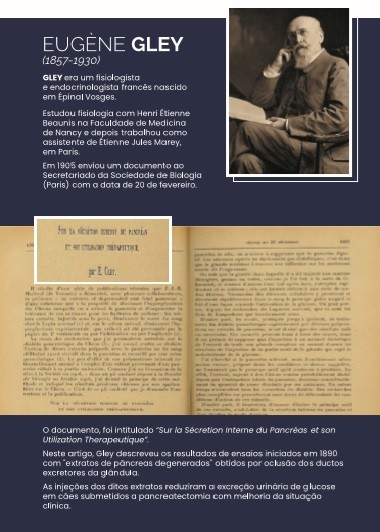 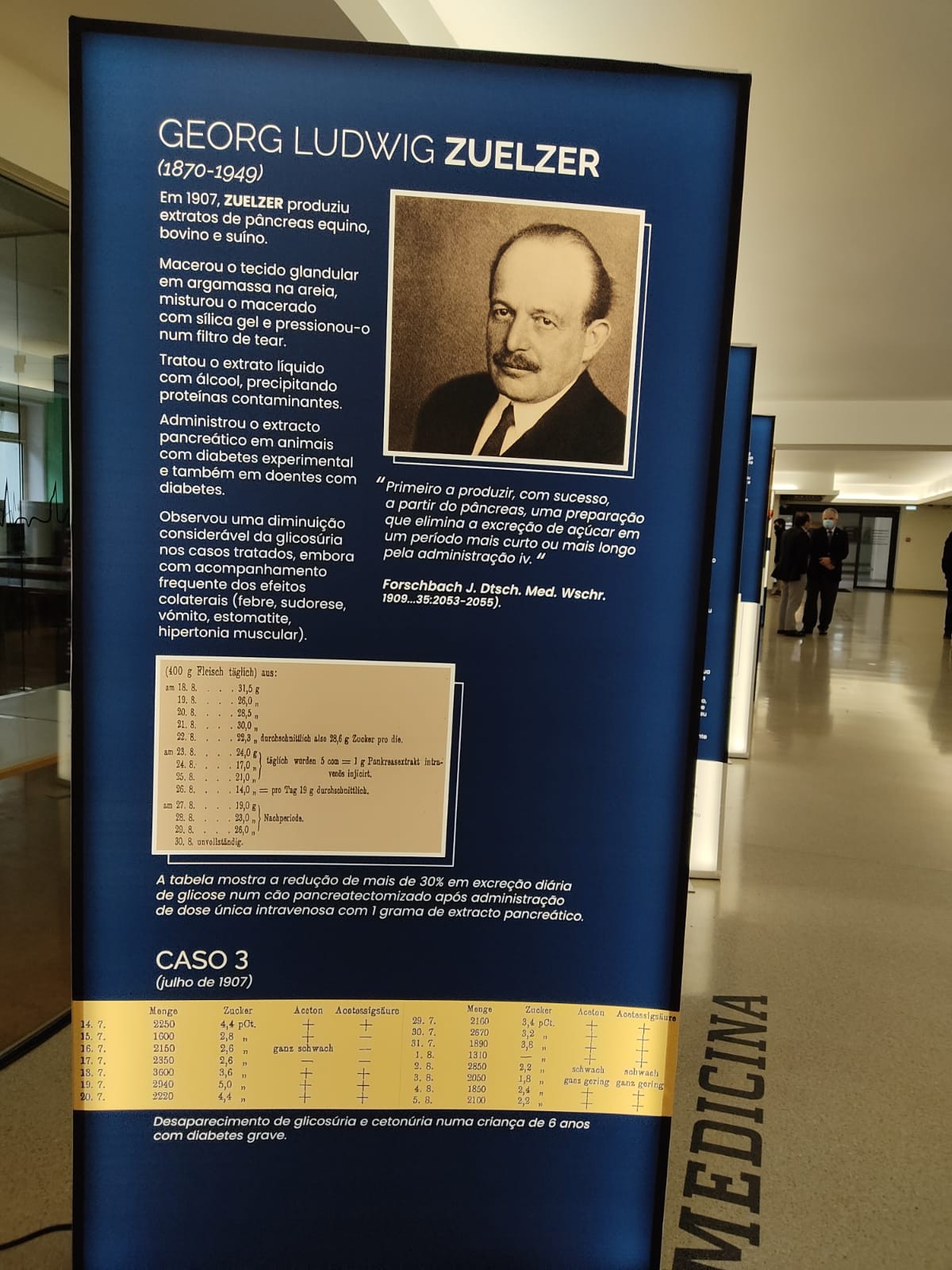 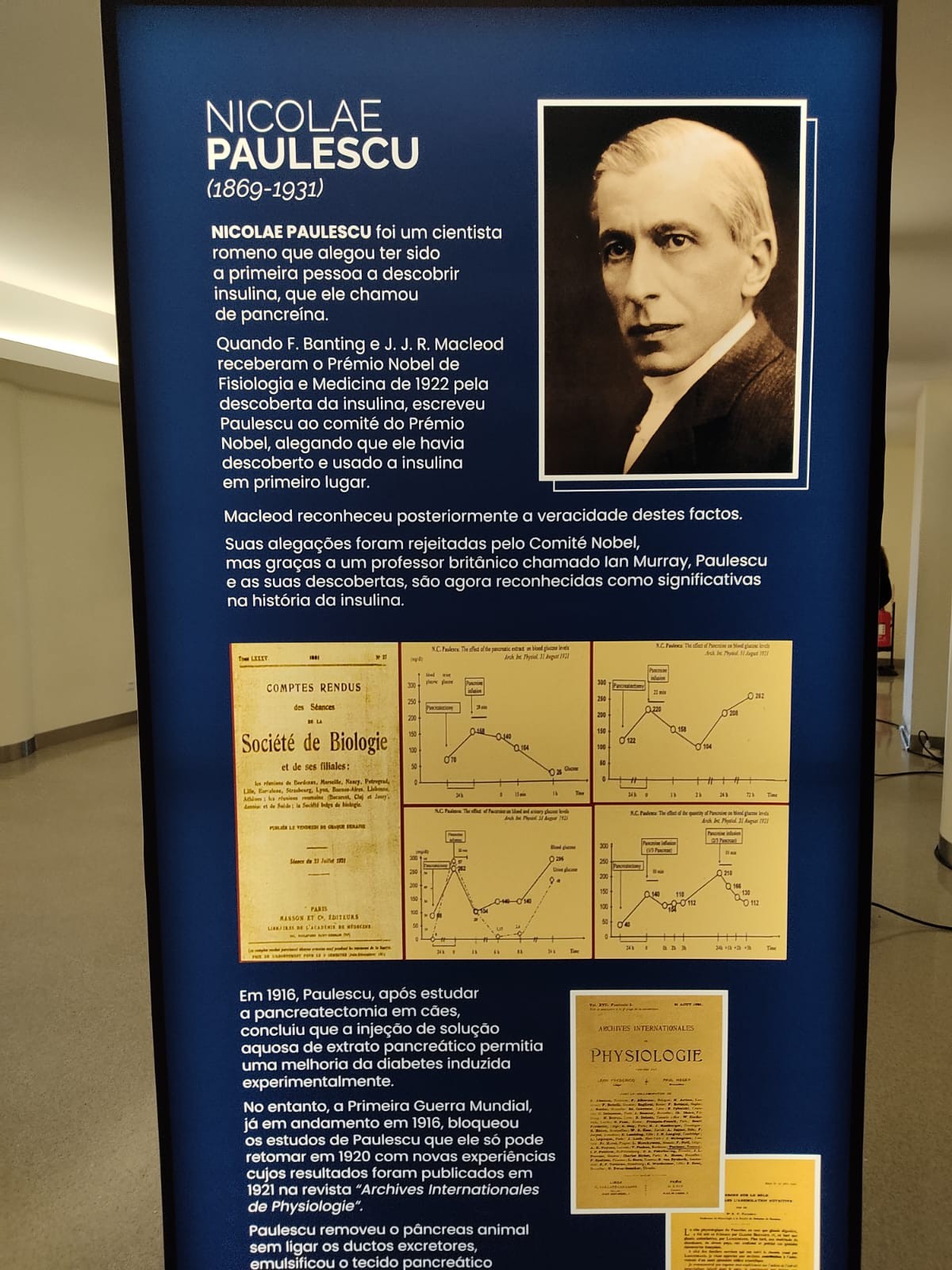 Luís Gardete also echoed the essential contribution of Dr Ernesto Roma, responsible for the creation of the Poor Diabetic People Protective Association. “He came from the United States to Portugal in 1925 and realized that insulin saved people, but the poor had no money to buy it, so he created this Association, and people who came to the Association had to bring a poverty certificate”, he explained, alluding to all the work involved in“ diabetes management ”and which goes beyond the therapeutic sphere.

In turn, José Manuel Boavida, President of the APDP, established the interesting parallel between the short time between the discovery of insulin and its practical application and the current situation of the vaccine against Covid-19. “It is not the first time in the history of Science that, when the importance of an intervention is realized, it comes into existence and we are able to overcome all limitations”, he said, showing his availability to create synergies and future projects with our Faculty.

Maria do Carmo Fonseca, Professor and Principal Investigator, praised the initiative, highlighting the importance of “using the past to prepare the future”, a principle on which she added the contribution of gene therapy, whose progress suggests that, in the future, the administration of insulin to diabetics (type 1) may be replaced by inoculation of the missing genetic material in the cells.

After the speeches were over, there was a visit to the 10 panels that form the exhibition and portray a summary of the history of Diabetes until the revolutionary discovery of insulin. 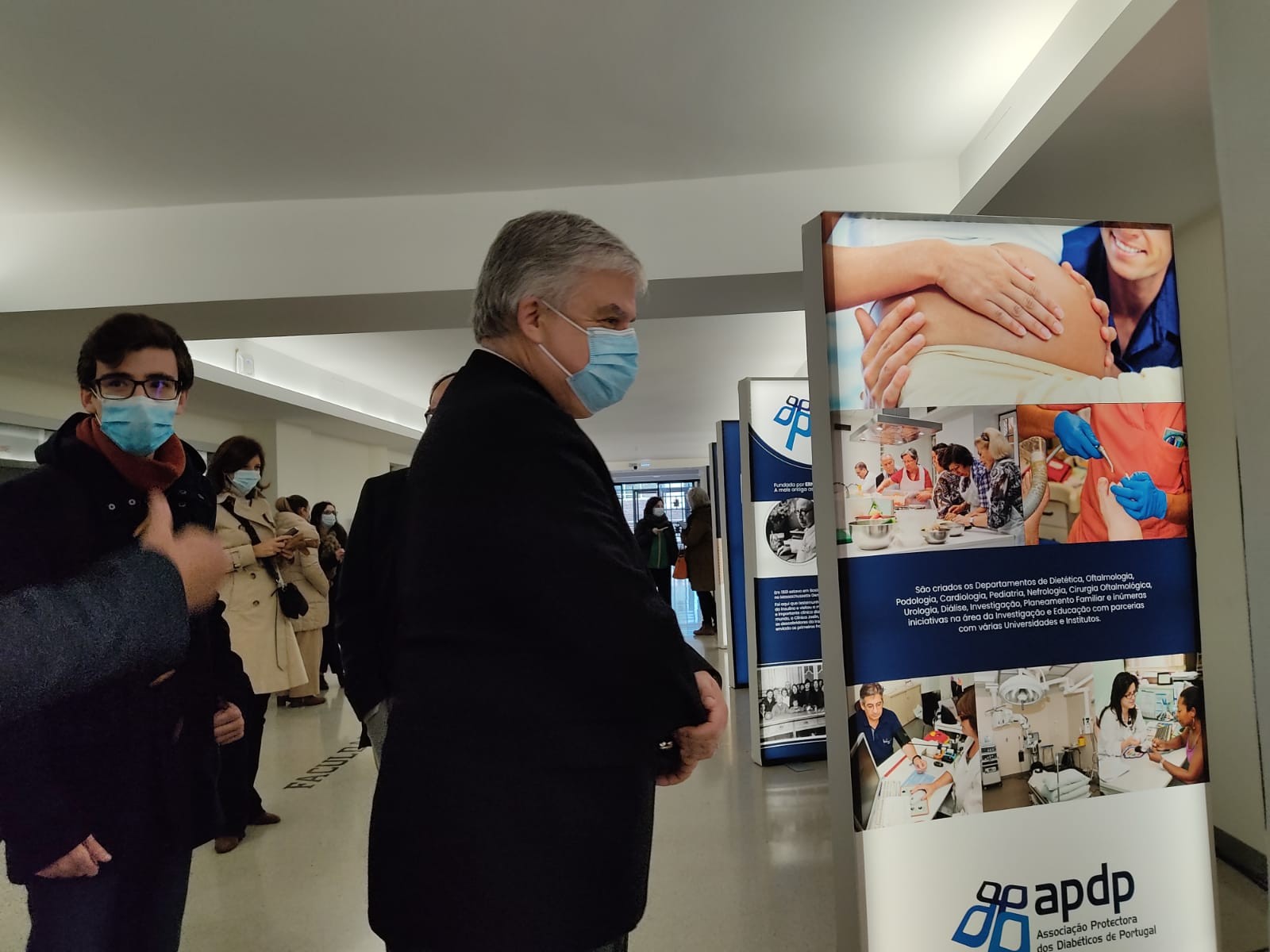 It should be noted that the Executive Committee for the Celebrations of the Centenary of the Discovery of Insulin (which includes the Ernesto Roma Foundation) has several activities scheduled throughout the year and integrates persons who have conducted important activities with scientific institutions and societies associated with diabetes treatment.

The centenary celebrations of the discovery of insulin are also sponsored by the International Diabetes Federation.

The next stop of the exhibition will be the Faculty of Medicine of the University of Porto, at the de S. João Hospital Centre, where it can be visited between 1-23 February. 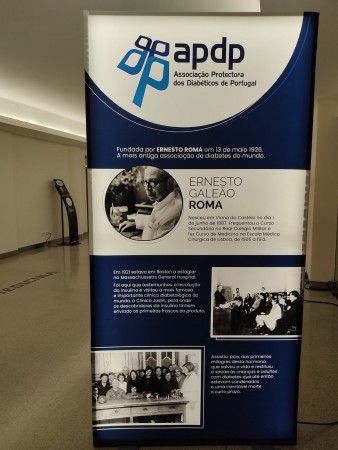 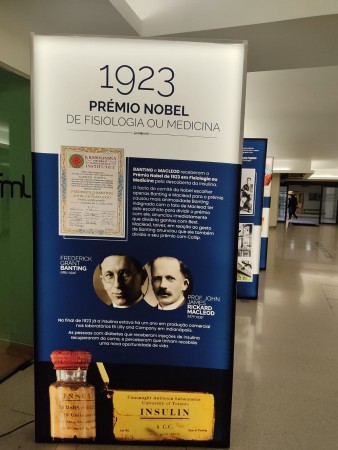 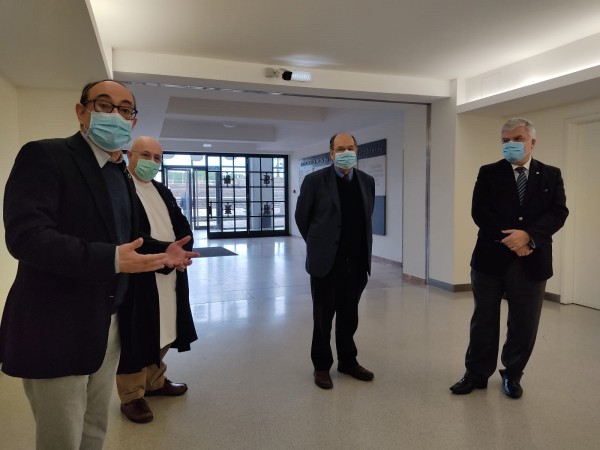 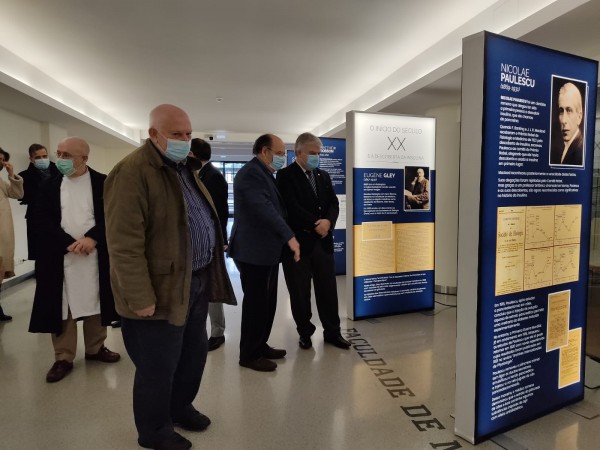 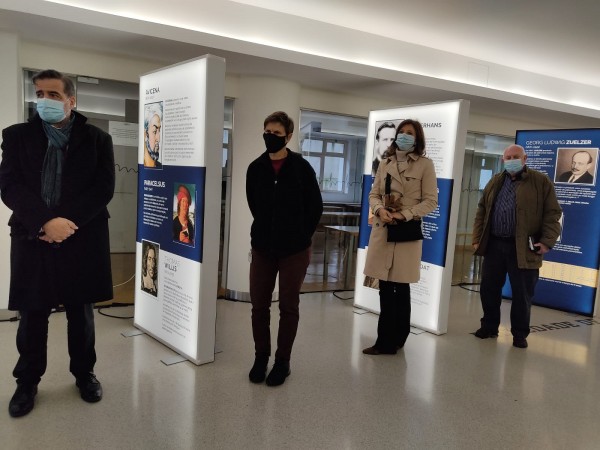 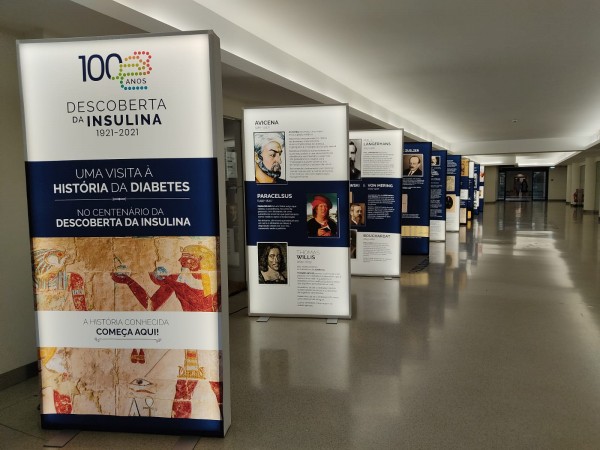